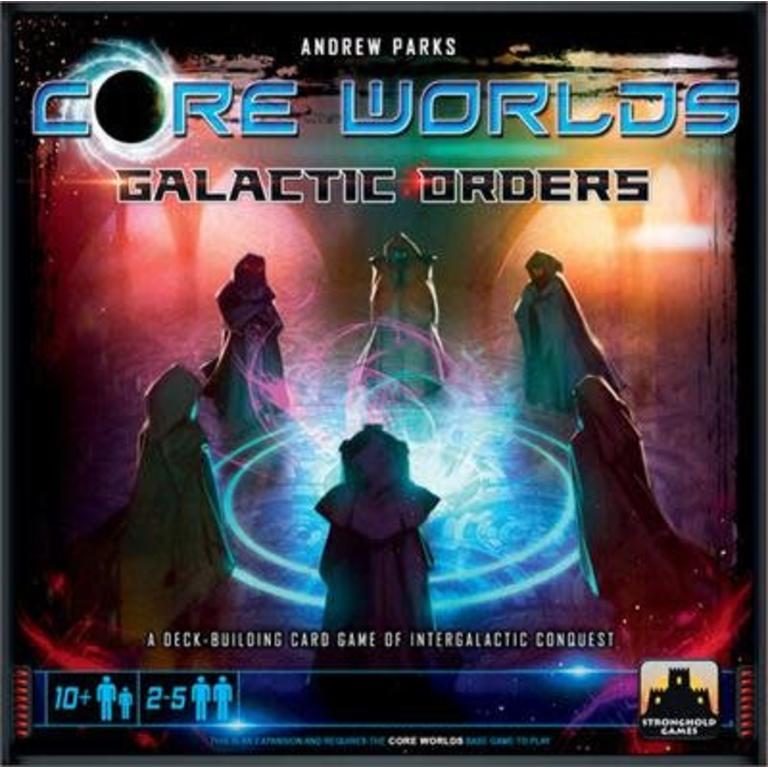 The Galactic Realm has collapsed! As a barbarian Star Empire on the fringes of the galaxy, you must seize this moment to lead your kingdom on a strike against the Core Worlds!

However, the six Galactic Orders of the Realm still exist, and continue to wield tremendous power. Your fledgling Empire must forge alliances with these powerful Orders, calling upon their aid tactically or drawing upon them strategically in the final push to assume the mantle of galactic supremacy!

Core Worlds: Galactic Orders is the highly anticipated first expansion to the one of the galaxys hottest new deck-building games!

These Orders were represented in the base set of Core Worlds by the six Prestige Cards: the Galactic Senate, the Science Guild, the Merchant Alliance, the Mining Coalition, the Order of Knighthood, and the Mystic Brotherhood. The Core Worlds: Galactic Orders expansion focuses on these six independent organizations and their influence upon a galaxy at war.

Many players noted the enigmatic icons on many of their Units and Tactics cards in the base set of Core Worlds, and the rulebook mentioned that these would be used in future expansions. Well, this is the first expansion to use them! Each Galactic Order is represented on the table by a large Galactic Order Card that specifies the special power associated with that Order, and each player starts with 20 Faction Tokens that match the Faction symbols on their Starting Decks.

So what kinds of powers do these Galactic Orders provide that could tempt you to spend your Faction Tokens and thereby reduce your final score to use them? Well, the Galactic Senate lets you take an extra Action, the Mystic Brotherhood lets you draw 3 cards, and the Order of Knighthood lets you add +2 Fleet Strength or +2 Ground Strength to any Invasion. Hows that for temptation?

And to add further temptation, there are also a whole slew of new Units and Tactics added to each Galactic Deck that allow you to spend your Faction Tokens in unique ways. For example, the Mutant Berserker (see right) will allow you to spend one of your Faction Tokens from the Science Guild to allow it to stay in play after invading a World. Thats not normally how the Science Guild works, but many Units like the Berserker provide you with a whole new universe of ways to spend your tokens.

Now you might be thinking that these tokens make the game easier since they provide so many new options to players. However, we have also added a new card type, Events, that provide new challenges for players as they advance into the different Sectors of the game.

Most of these Events provide players with a choice of how they are affected by the Event, so therefore players must decide the best way to face each of these challenges. For example, if the Prince of the Realm (see left) shows up in Sector 5, players must choose to spend either 1 extra Action or 2 extra Energy to draft a Prestige Card. Similarly, if the Local Mercs show up in Sector 3, players must choose whether or not to pay them off by spending 2 extra Energy when invading a World; otherwise, theyll have to fight the Mercs, who provide the World with +1 Fleet Strength and +1 Ground Strength. And since the Events are keyed to specific Sectors, players also get a stronger sense of the flavor of the Core Worlds universe as they travel deeper and deeper towards the galactic core.

Although we felt it was important to completely design and playtest the expansion before releasing the base game, we also closely monitor player comments on boardgamegeek.com and on other sites throughout the internet. We have therefore created some additional features that directly respond to players desires for future expansions.

In particular, we noticed that players really wanted more ways to cull their decks, and also that players wanted greater incentives to do more invading in Sectors I & II. One of the ways we have addressed both of these concerns is by introducing a new type of card called Advancements, which attach themselves directly to Worlds in your Warzone. There will only be one Advancement in this expansion, but you can expect to see many more in future expansions. The Advancement that comes in Galactic Orders is called the Capital City, and every player starts with it attached to his or her Home World. During each Energy Phase, the Capital City allows a player with at least 3 Worlds in his or her Empire to place any card from his hand beneath the Capital City for the rest of the game. So now you can cull one card every turn (even those pesky Tactics!) once you have conquered your first two Worlds. Suddenly, running out and conquering Worlds during the first two Rounds becomes much more important!

Players have also noted that players who deploy all of their cards in the first few turns gain a healthy advantage over those who would rather spend some of their time drafting and invading. Also, players really wanted to see more creative names for their Home Worlds. So we have taken this opportunity to re-issue the five starting Home Worlds with new names and one additional ability. They retain the ability from the base set (discard 2 cards for 1 Energy), but the other ability is new. Now, during the Draw Phase, if the number of Worlds in your Warzone is greater than the number of Units in your Warzone, you get to draw an extra card! Therefore, players who draft lots of cards and invade lots of early Worlds will receive compensation by being able to move more quickly through their larger decks. The thin deck strategy is still just as viable as before, but now those who want to draft more cards (and get those Galactic Order Icons into their decks more quickly!) have an equally viable strategy. The more viable strategies in the game, the better for everyone!

Some features requested by players will not appear in this expansion, but we are planning to add them to future expansions, including the ability to draft unique Home Worlds and starting Heroes. So hang tight, galactic barbarians, the Core Worlds universe will continue to expand for millennia to come!

"Core Worlds: Galactic Orders" contains:
93 new Cards
6 large Galactic Orders cards
126 Faction Tokens
5 Raven Tokens
1 Rulebook
and a custom cardboard insert to hold all of these components and plus those from base game of Core Worlds!