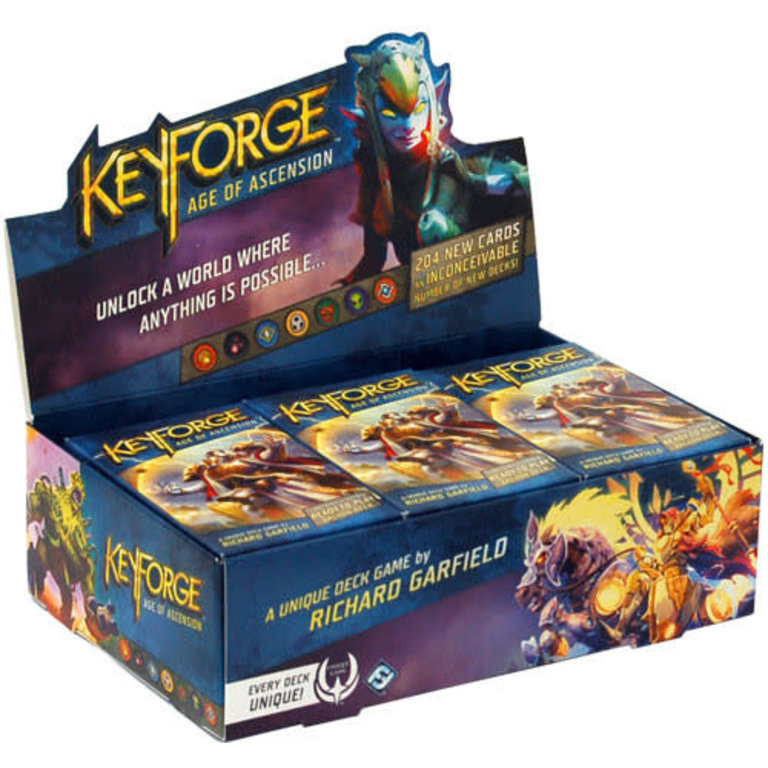 Age of Ascension Archon Decks are limited to 24 per person; orders placed in multiples of 12 will receive factory sealed displays, for as long as supplies last.

In 2018, legendary designer Richard Garfield introduced the world toÂ KeyForgeâ€”a game where every deck is as unique as the player who wields it, coming pre-built and ready-to-play. Wits and tactical prowess win the day in a fast-paced game of cosmic competition where death is temporary, but glory is forever.

This new set further explores the gameplay ofÂ KeyForgeÂ with new keywords, restricting when certain cards can be played or freeing others from the constraints of standard placement: Alpha, Omega, and Deploy!Â

The previously unseen cards ofÂ Age of AscensionÂ are seamlessly mixed with 166 favorite cards fromÂ Call of the ArchonsÂ to create new synergies and allow you to rediscover familiar cards in a fresh light. Cards that appear in both setsÂ have different card numbers, but all other text and abilities remain the same. Additionally, while the new card pool does feature the return of favorite cards, you will never find anÂ Age of AscensionÂ deck with only cards that originally appeared inÂ Call of the Archons. In every deck you open, you are guaranteed to see new faces.

Even cards that do not carry over fromÂ Call of the ArchonsÂ toÂ Age of AscensionÂ have the chance to make an appearance as new Legacy cards. Legacy cards are plucked from their normal settings and placed in new situations to unlock even stranger synergies. InÂ KeyForge, any card that has existed in any previous set can be pulled forward to become a Legacy card included in a current Archon Deck.Â Â

Beyond the cards themselves, you may notice other subtle differences inÂ Age of Ascension, highlighted in the setâ€™s new starter. TheÂ KeyForge: Age of Ascension Two-Player Starter SetÂ features all the tools you need to either begin or expand your adventures on the Crucible, including two uniqueÂ Age of AscensionÂ Archon Decks, a Quickstart Rulebook, two paper poster playmats for easily organizing your play area, and all the keys, tokens, and chain trackers you and your opponent need to start playing.

Unlike theÂ Call of the Archons Starter Set, this set does not include two standardized learning decks, and you'll also discover that stun and increased power are now marked by tokens rather than status cards. Both theÂ Call of the Archons Starter SetÂ and theÂ Age of Ascension Two-Player Starter SetÂ provide excellent points of entry for new players, and as the game continues to grow, the power is with you to choose the option thatâ€™s right for you.Â

You'll be able to track your Archon Decks from bothÂ Call of the ArchonsÂ andÂ Age of AscensionÂ in the Master Vault atÂ KeyForgeGame.com. Here, you can track your decks and see how they fit into the meta at large, follow the performance of other Archons across the Crucible, and stay updated on tournaments and events. AsÂ KeyForgeÂ continues to evolve, so too will the Master Vault, so keep an eye out for what secrets are emerging!

As the world of the Crucible continues to grow, you will encounter new and wondrous species in every corner of this growing planet.Â

The world of the Crucible is vastâ€”what will you uncover in your journeys? Are you ready to seek the knowledge of a new age? Let your curiosity lead you to new discoveries and step into theÂ Age of Ascension!

C$6.50
In stock
Article code 4251715400197
The KeyForge GEMINI Deck Box can hold one complete, double-sleeved KeyForge Deck and also contains an accessories drawer to keep Æmber, Keys, or any other extras.

C$6.50
Out of stock
Article code 4251715400210
The KeyForge GEMINI Deck Box can hold one complete, double-sleeved KeyForge Deck and also contains an accessories drawer to keep Æmber, Keys, or any other extras.

Power Tokens for KeyForge: Call of the Archons (18)

Stun Tokens for KeyForge: Call of the Archons (10)

Shield Tokens for KeyForge: Call of the Archons (10)

"Forged Keys" Token Set for KeyForge: Call of the Archons

C$51.95
In stock
Article code 605546840938
This complete set of accessories compatible with KeyForge: Call of the Archons, is sure to enhance your gaming experience.

C$6.95
In stock
Article code 605546840853
Keep track of your points, life, draw limit penalties, or chains with ease and style using this Forged Key: Chain Tracker from The Broken Token.

out of stock
Quickview
GameGenic
KeyForge: Aries Deck Box - Blue
A casual deck box specially designed for KeyForge.
C$3.95
By using our website, you agree to the use of cookies. These cookies help us understand how customers arrive at and use our site and help us make improvements. Hide this message More on cookies »