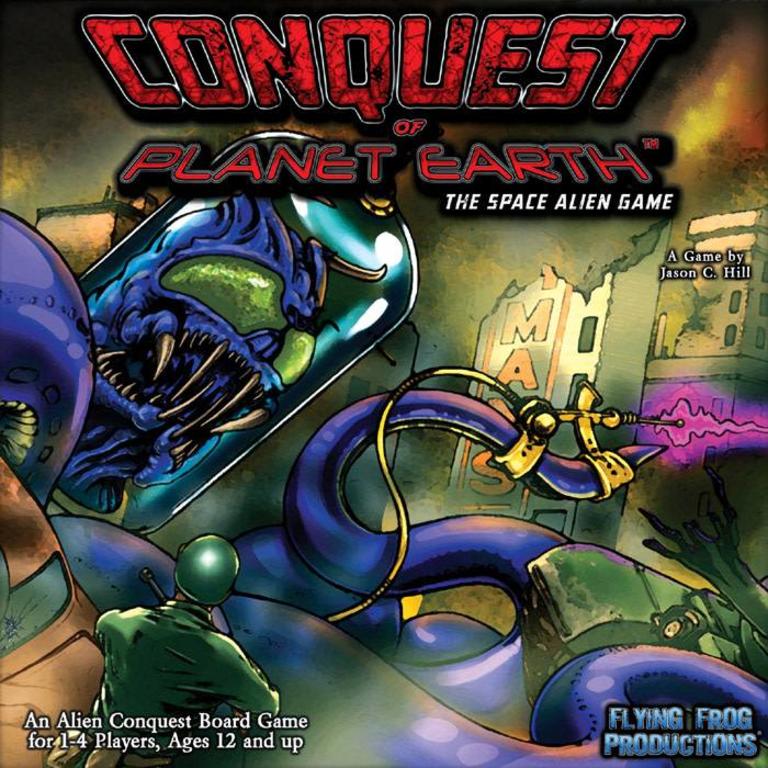 C$74.95 C$56.21
Flying Frog
In stock
Article code DNR-094922228079
Share this product:
Conquest of Planet Earth, The Space Alien Game is a fast-paced game of terrifying alien invaders, futile Human resistance, and 50's SciFi Movie Action. Players each take on the role of a different Alien Race, all part of the same invading armada, but each with their own unique abilities and ambitions. Command waves of Flying Saucers to blast the Human resistance into submission with Death Rays and terrifying weapons of war as you unleash powerful alien technologies upon the Earth (and the other Alien Races if they get in your way). But beware; these pitiful Humans are not defenseless. They will fight to the last to defend their planet, aided by countless platoons of army soldiers, powerful Human Heroes, and their most deadly new weapon, the dreaded Atomic Bomb.

Featuring a modular game board, 10 different Alien Races to play (such as the Orzax, masters of technology; or the Venezian Matriarchy, beautiful but deadly space amazons), a host of Human Resistance to battle, and four game types - Competitive, Cooperative, Team Game, and Solo Play. Conquest of Planet Earth is a strategic game of maneuvering, backstabbing, and fantastic battles for alien conquest. It is the 1950s and a shadow has fallen across the Earth! A massive Alien Armada has come from the deepest reaches of space with a single goal to conquer the planet! But mankind will not be swept away easily. As wave upon wave of alien saucers descend from the heavens to unleash total destruction, Captain Fantastic, Earth's mightiest superhero, rallies humanity's defenses. Flying Saucers dogfight with Jet Fighters over the skies of the capitol and heavy Army Tanks roll through the streets to defend against waves of Robotic Soldiers and Tentacled alien fiends. Though these primitive Humans are ripe for defeat, the aliens may be their own worst enemy. Old rivalries flare and ambitions ignite amongst the varied alien races of the armada as they do anything to gain the favor of their Overseer masters, including undermining and betraying one another to ultimately achieve the sole glory in the Conquest of Planet Earth!
By using our website, you agree to the use of cookies. These cookies help us understand how customers arrive at and use our site and help us make improvements. Hide this message More on cookies »