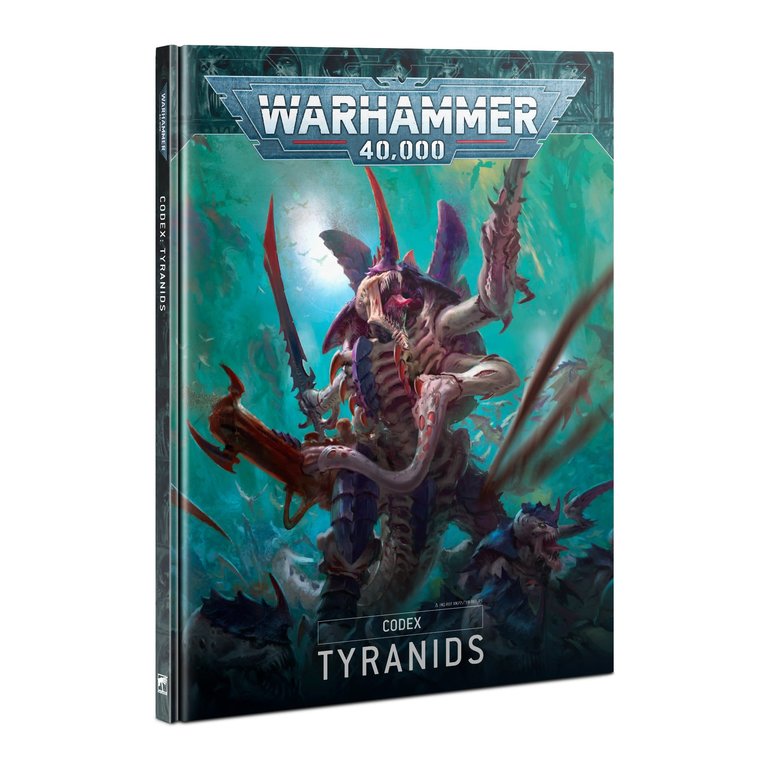 C$65.00 C$55.25
Games Workshop
In stock
Article code 9781839066153
This luxurious and expansive book is a must-have for those who play and collect the devouring forces of the Tyranids.
Share this product:

The Tyranid hive fleets are rapacious alien swarms that flow from beyond the galactic fringe to devour all life. From their chitinous blades and parasitic guns to the vast hive ships that ferry them across the stars, everything about the Tyranids is organic. Like an endless insect swarm, their individual warrior organisms are given unified purpose by the imperatives of a vast and ineffable alien consciousness known as the Hive Mind.

This vast, ineffable, and predatory metasentience has but a single goal – to feed. Its fleets strip world after world of all biomass, leaving nothing in their wake. The smothering psychic shroud known as the Shadow in the Warp rolls before them, isolating each new prey world and sowing terror through its defenders before the invasion swarms descend. When the Tyranids attack they do so in unstoppable numbers, unleashing nightmarish bio-weapons upon their victims.

This luxurious and expansive book is a must-have for those who play and collect the devouring forces of the Tyranids. It provides the rules to play a Tyranid army, and contains a mountain of background lore, so you can learn about the history of the Tyranids' unstoppable onslaught into the galaxy, the combat applications of their countless organic bio-weapons, and the divergences in evolution and behaviour between the tendrils of the innumerable hive fleets.

Inside this 128-page hardback book, you'll find:
– In-depth coverage on the vast, nearly-uncountable swarm, and the numerous conflicts the Hive Fleets have been involved in since the Imperium first encountered them. You'll also find information on the named Hive Fleets such as Leviathan, Behemoth, and Kronos
– Gruesome and detailed artwork that depicts everything from the lowliest Ripper to the most terrifying Hive Tyrant, each boasting chitinous armour and vicious fangs
– All the rules you need to play a Tyranid army, including 41 datasheets covering every size and shape of biomorph and bioweapon, as well as a number of rules for rare organisms, Hive Fleet adaptations, adaptive physiologies, spore seeding, synaptic imperatives, and Hive Mind disciplines
– All the rules you need to wage a Crusade campaign of narrative games in which your Hive Fleet devours planets, including new Agendas, Battle Traits, Requisitions, and Crusade Relics
– An 'Eavy Metal miniatures showcase full of wonderfully painted Tyranid miniatures

This edition is presented as a hardback with a black ribbon marker, soft touch cover, and silver foil blocking. This collectors' edition of Codex: Tyranids is a limited print run and is only available while stocks last.

C$34.00 C$28.90
In stock
Article code 5011921174614
Datacards make referencing your rules in battle easy. Containing quick-reference Stratagems, Synaptic Imperatives, and psychic powers, they're perfect for ensuring you don't forget crucial rules when you need them most.

C$180.00 C$153.00
In stock
Article code 5011921163526
Command a teeming horde of bio-engineered monsters to devour the galaxy with Combat Patrol: Tyranids! This boxed set provides you with all the units you need to get started or reinforce an existing army.

-15%
Quickview
Games Workshop
Warhammer 40K: Tyranids - Combat Patrol
Command a teeming horde of bio-engineered monsters to devour the galaxy with Combat Patrol: Tyranids! This boxed set provides you with all the units you need to get started or reinforce an existing army.
C$180.00 C$153.00
Games Workshop

C$48.00 C$40.80
Out of stock
Article code 5011921173440
This kit bullds one Parasite of Mortrex. Armed with clawed limbs and a barbed ovipositor, this winged beast is a mobile incubation organism housing hundreds of Ripper pods.

C$48.00 C$40.80
Out of stock
Article code DNR-5011921175413
Marked with the colours of Hive Fleet Leviathan, these dice are perfectly evolved for rolling, helping you to prey upon and destroy your enemies.

out of stock
-15%
Quickview
Games Workshop
Warhammer 40K: Tyranids - Dice
Marked with the colours of Hive Fleet Leviathan, these dice are perfectly evolved for rolling, helping you to prey upon and destroy your enemies.
C$48.00 C$40.80
By using our website, you agree to the use of cookies. These cookies help us understand how customers arrive at and use our site and help us make improvements. Hide this message More on cookies »