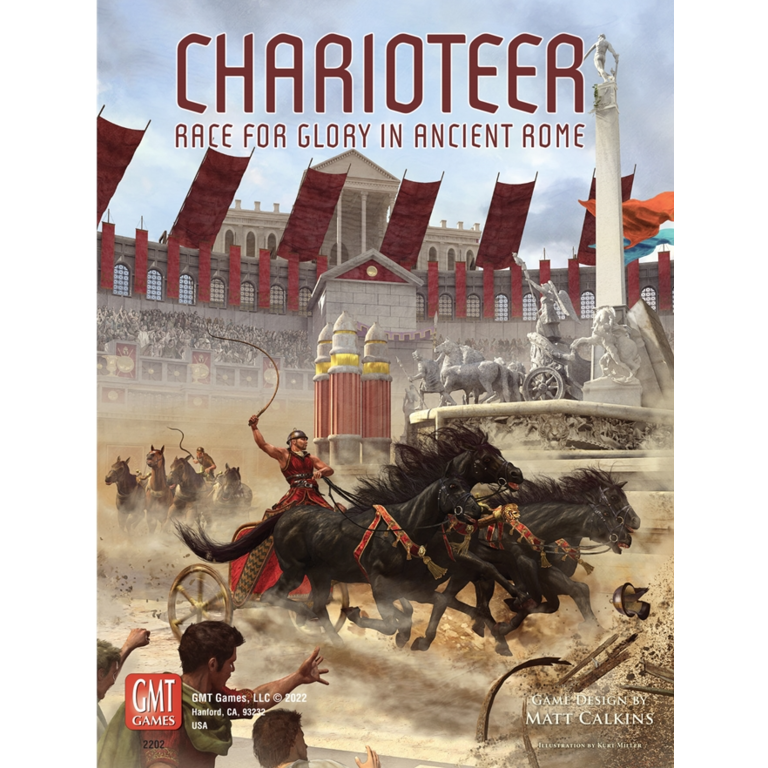 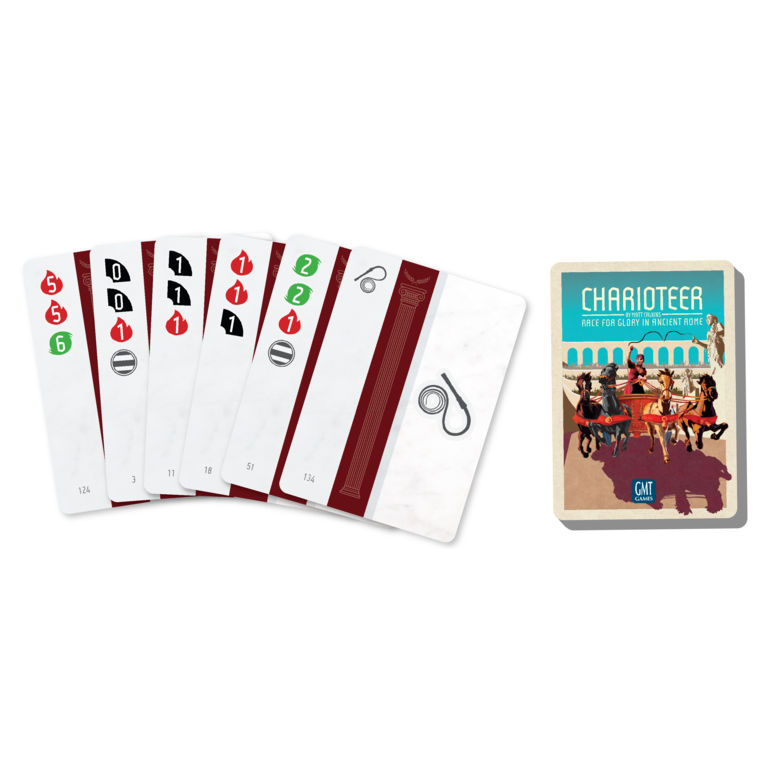 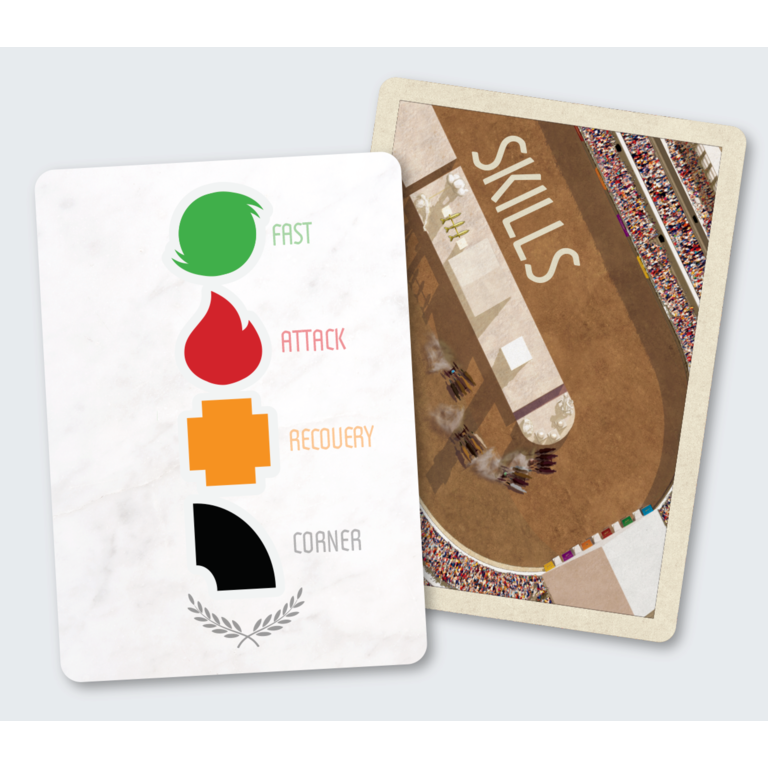 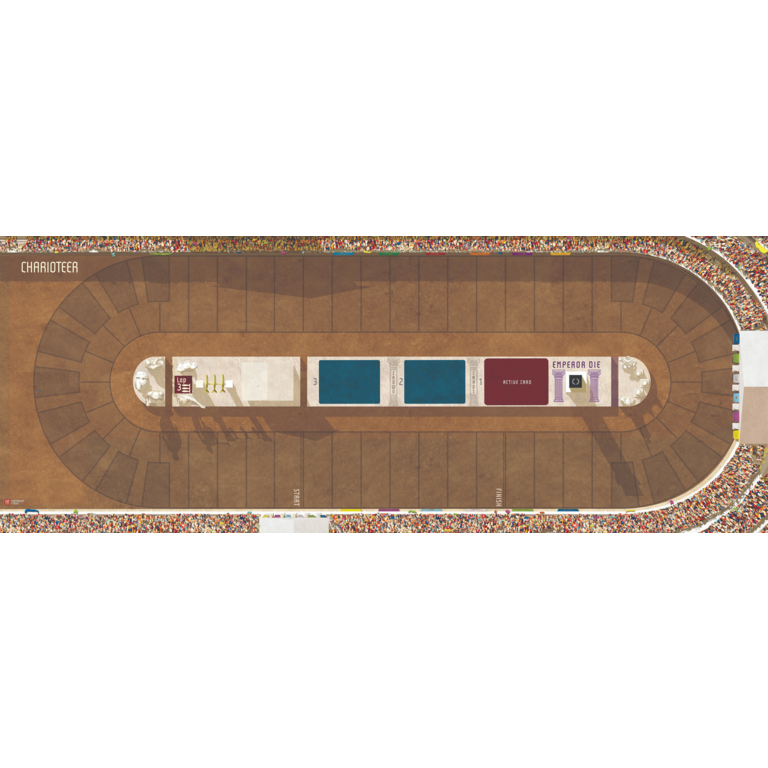 C$94.95
GMT Games
In stock
Article code 817054012367
The ground trembles under a thousand angry hoofbeats. Wheels creak and reins pull as racers drive their horses forward in a panic; you are a charioteer in the Circus Maximus, the greatest raceway in the ancient world!
Share this product:

Charioteer is a strategic racing game that plays in one hour. Each player controls a chariot in the Circus Maximus of ancient Rome. There's lots of action, and it happens quickly, with simultaneous move selection.

Movement is determined by melding sets from a hand of cards. Every card does more than one thing, and it takes multiple matching cards to make a move. Choosing to use a card in one set means deciding not to use it in another. Timing when to make a critical move is as important as knowing what move to make.

Moves come in four colors, and each has a special advantage. Play a red move to attack your opponents, yellow to recover from disruption, black to turn a sharp corner, and green to sprint.

Each racer begins the game with different abilities, and they improve their skills as the race progresses, leading to big bonuses in their favorite types of moves. Show the emperor the kind of move he prefers, and a racer's skills will increase even faster.

Players deploy tokens to give their moves a special bonus. More tokens can be earned by impressing the crowd with large matching card plays. Players may choose to delay using their best sets until they're big enough to qualify for a fan token.

Some races will be violent and others calm, depending upon whether the players and emperor behave disruptively. Attacks cause damage, which reduces movement speed. Players who specialize in recovery moves may overcome damage quickly. Others may need to carefully deploy their shields on turns when violence is expected.

It's not always clear who's winning the race. Being in front of the pack may not be as important as developing a critical skill, collecting powerful tokens, or keeping damage low. Whip icons allow those who have fallen behind to surge back into competition.

Charioteer is easy to learn. It can be played by bright kids as well as adults. Despite its accessibility, it is a game of skill.

C$27.95
In stock
Article code 817054011841
This new re-themed version of Battle Line is a two-player strategy card game built around the theme of Medieval warfare.

C$82.95
Out of stock
Article code 817054012008
Sixty-Something Millions of Years Ago — A great ice age has ended. With massive warming altering the globe, another titanic struggle for supremacy has unwittingly commenced between the varying animal species.

out of stock
Quickview
GMT Games
Dominant Species: Marine
Sixty-Something Millions of Years Ago — A great ice age has ended. With massive warming altering the globe, another titanic struggle for supremacy has unwittingly commenced between the varying animal species.
C$82.95
GMT Games

C$22.95
In stock
Article code 817054012374
The CDG Solo System plays alongside your favorite GMT Brand "Card Driven Games" and is designed to enhance your solitaire experience.

Quickview
GMT Games
CDG Solo System
The CDG Solo System plays alongside your favorite GMT Brand "Card Driven Games" and is designed to enhance your solitaire experience.
C$22.95
By using our website, you agree to the use of cookies. These cookies help us understand how customers arrive at and use our site and help us make improvements. Hide this message More on cookies »