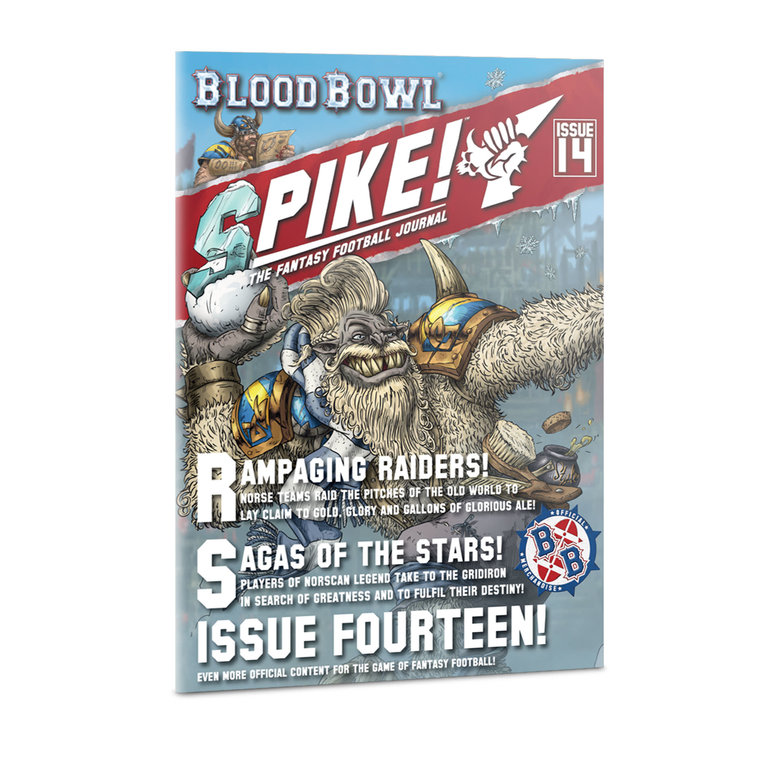 C$20.00 C$17.00
Games Workshop
Out of stock
Article code 9781839065002
This issue’s Guest Editor Harold Haroldson descends from the frigid north to bring a Spike! Journal filled with boozy boars and some icy slip-’n’-slide gameplay. That’s right, this issue brings the Norse Team to your games of Blood Bowl!
Share this product:

This journal covers the history, rules, and rosters of the Norse team. Alongside tales of booze, bone-breaking tackles, and a few incidents of accidentally freezing to death, you'll find the fantastic fun and essential commentary you've come to expect from Spike! Journal. As such, this magazine is the perfect companion for any cold-loving coach.

- As Cold as Ice: background on the origins of Norscan teams in Blood Bowl and how they play on the pitch. Includes information on their team positions, star players, and a team roster.

- Famous Norse Teams: descriptions and background on some of the more famous Norse teams, including the Arctic Cragspiders, Vynheim Valkyries, New Fjord Jötnar, and the Skjårlsberg Icicles.

- Norsca Rampagers Team Spotlight: an in-depth article focusing on the Norsca Rampagers, one of the most famous and successful Norse teams ever to grace the Blood Bowl pitch. Includes details of their history, team profile and colours, honours, Spike! team rating, as well as the roster of their famous 2497-2498 squad, and loads more.

- Star Player – Ivar Eriksson: a profile on the renowned Blitzer known as 'The War Raider', the famed Norsca Rampagers player who signed with the team at the tender age of 16. Since first being given the opportunity to play, Ivar captured the heart of the crowd, eventually becoming Captain after a mid-match brawl with his predecessor.

- Dirt from the Dugout: this time Mindy Piewhistle delves into the accusations that the up-and-coming Berserker, Bjor Hakonsson, may not be the champion drinker he claims.

- Star Player – Skrorg Snowpelt: a profile on the famous Yhetee, Skrorg. After butchering most of his teammates, he was swiftly sacked and sent to Rockbeard's Rage Rehab, but emerged a changed beast! His improved attitude has made Skrorg a huge fan favourite, as a furry showman who plays to the crowd.

- Northern Leagues: brand new rules and advice for running Northern Leagues – a variant on the standard Blood Bowl league season, allowing players to compete in the Icebowl – open to all teams with the usual budget of 1,000,000 gold pieces – for the coveted Icebowl Chalice. Also includes a unique Harsh Tundra Weather Table and a Norsca Kick-off Table, both of which you can use by rolling 2D6.

- Coffin Corner: Spike! Journal's obituaries column commemorating those players who are no longer with us, whether trampled on the pitch, torn apart, or possibly eaten.

- Chat with the Rat: ace Skaven reporter Hackspit ‘the Scribbler’ Quillchewer meets with Fjörgskeg Raiders head coach Jarl Stelken Mikaelsson to talk about their claims of being the most decorated Norse team in history, and how they built up their impressive trophy collection.

- Norse Balls: includes background and rules for 2 unique Norse Balls – the Hammer of Legend Ball and the Runestone Ball.

- The Norscan Way: a detailed introduction to coaching Norse teams. Includes an overview of the strengths of their team, positions, tactics, and more.

- Star Player – Thorsson Stoutmead: a profile on the beer-barrel-bowling bombardier, detailing how Thorsson first decided to use a barrel as a weapon, his drinking problem, and the book he published.

- Dungeon Bowl Update: Norse Teams: provides a narrative and rules update for players to use their Norse Team miniatures in games of Dungeon Bowl.

- Mighty Blow! – Free Beer: a look back on some of the tall tales from the career of Bob Bifford. Includes a comic strip in which Bob Bifford reminisces about the Norscans.

out of stock
-15%
Quickview
Games Workshop
Blood Bowl: Norse Team - The Norsca Rampagers
The multi-part kit is comprised of 120 plastic components with which you can assemble the Norsca Rampagers, a Norse team for use in games of Blood Bowl.
C$60.00 C$51.00
By using our website, you agree to the use of cookies. These cookies help us understand how customers arrive at and use our site and help us make improvements. Hide this message More on cookies »