Bloodborne The Board Game 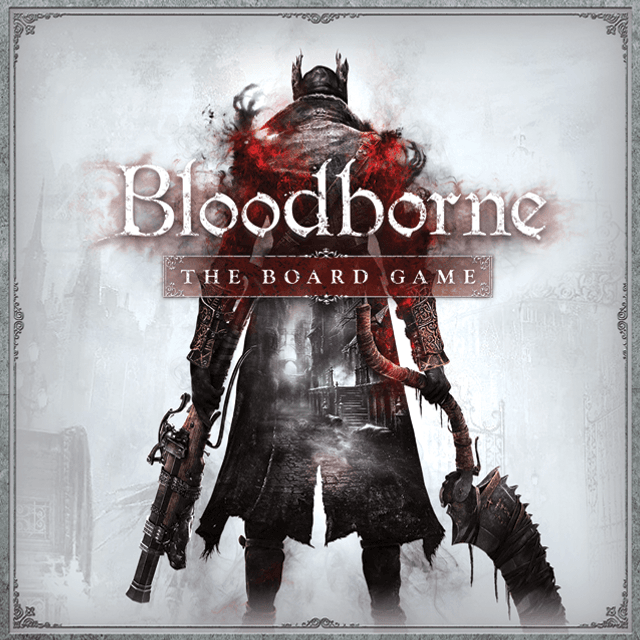 Based off the immensely popular videogame of the same title from 2015, Bloodborne: The Board Game brings the dark corners of the city of Yharnam to your tabletop. Along with its sister-series, Dark Souls, the game is famous for its tough but fair difficulty and frenetic combat, two elements that we hope to see captured by the board game iteration. 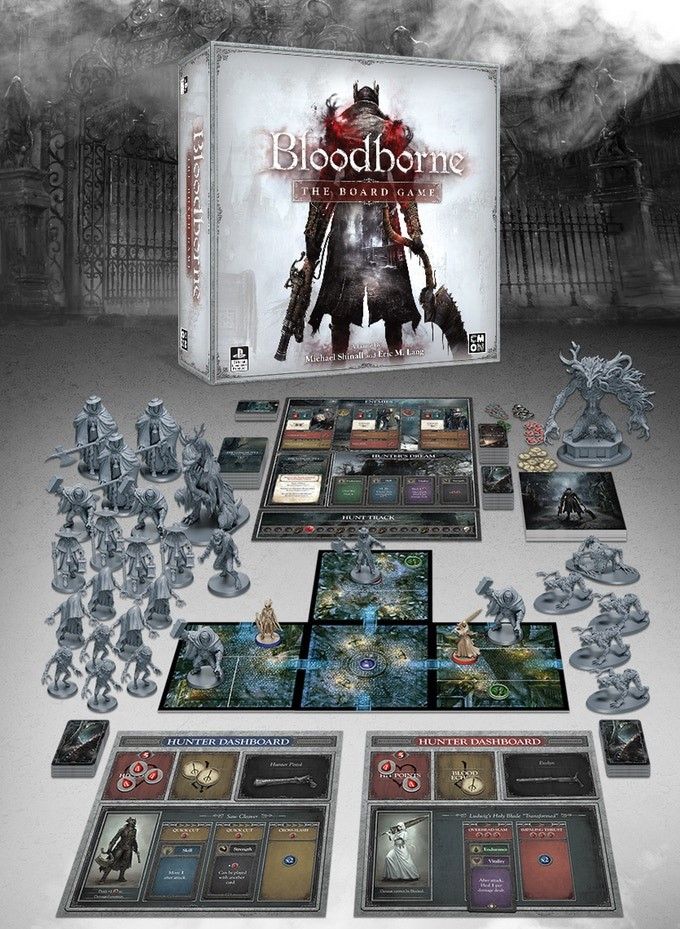 Each player takes on the role of Hunter, a slayer of monsters and seeker of secrets in the cursed city. Together they will battle their way through the streets of Yharnam, fighting against the game itself in jolly cooperation. They will have an arsenal of options to aid them, including the original game’s signature trick weapons - weapons that change their form and attack style to help deal with a variety of foes.

And, oh boy, does the game have foes! As you’d expect from any Cool Mini Or Not title, Bloodborne: The Board Game is filled to the brim with miniatures representing the Hunters and their prey. We especially like the sculpts for the game’s monsters that look like they were taken straight out of the videogame. Those of you with an inclination for painting miniatures will have a blast with these critters. Getting all the vines painted on the Cleric Beast would be its own boss fight though... 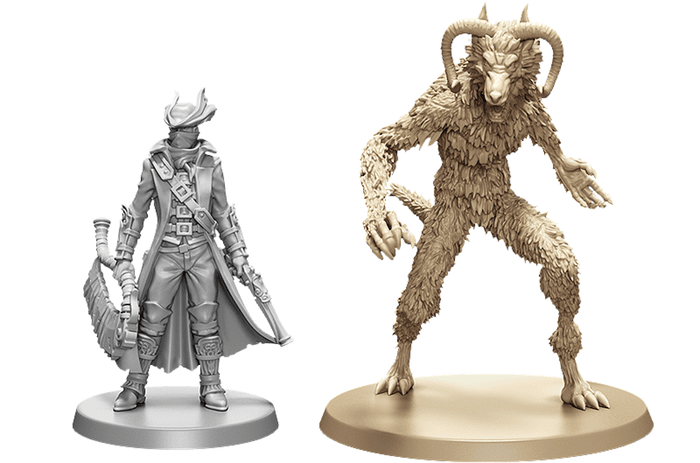 The game is also campaign based, allowing players to improve their Hunters over time in the same manner as the video game. The details are currently sparse form the publisher as to the exact mechanisms of character advancement, but we hope to see some equivalent to the levelling of skills that is present in the video game.

There are already a ton of expansions announced for this title (which are also available for pre-order, incidentally), ensuring that your adventures in Yharnam will continue anon for some time. If you are a fan of Bloodborne, or would just like a little dose of dark fantasy in your board gaming collection, this title is a shoo-in! 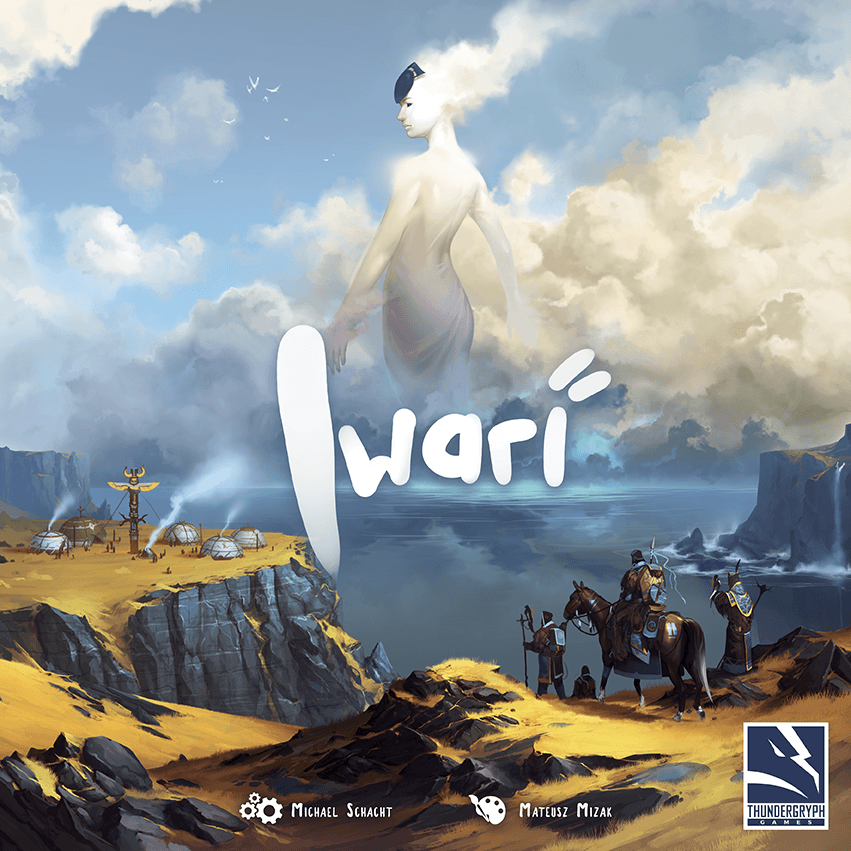 A unique blend of the abstract and 4x genres, Iwari takes the appeal of both and mashes them into one cohesive experience. Each player controls a tribe, spreading their settlements across the vast land of Iwari. 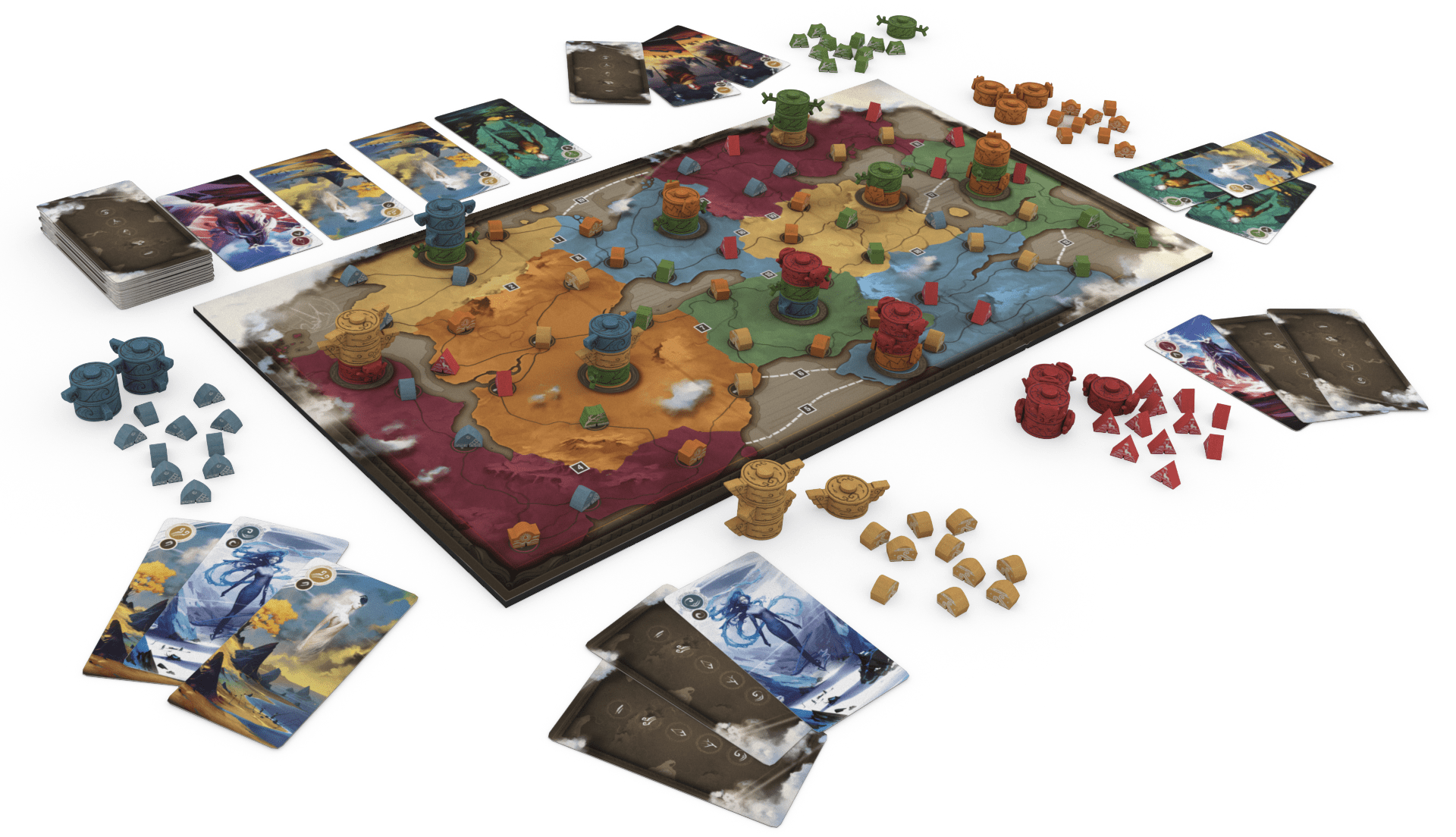 Each turn they may place a new tent in one of the five regions of the board, trying to gain a majority in a given territory. Alternatively, they may choose to construct nature totems to bond with the primeval Titans - nature spirits that inhabit the land. This involves the fun little touch of actually getting to stack totem pieces on top of each other on the board which, if nothing else, gives players the opportunity to indulge in their juvenile sensibilities by pointing at the growing totem and bragging: “Mine’s the biggest!”

Both controlling territories and building totems will award victory points, but there are many more parts of the game that will help determine if your tribe emerges victorious. Complete missions to earn perks that will help you later in the game. Scoring will occur at various times during the game, meaning that neglecting the early game may cause you problems in the long run, even if you have a formidable board position at the end.

Filled with colorful components that make it easy to parse the board at a glance, Iwari is also a beautiful game to look at. Each of the different tribes tents has its own shape, as do their totem pieces. Watching your tent settlements expand and those totems grow higher and higher is a joy in and of itself. Reserve your copy of this unique title today! 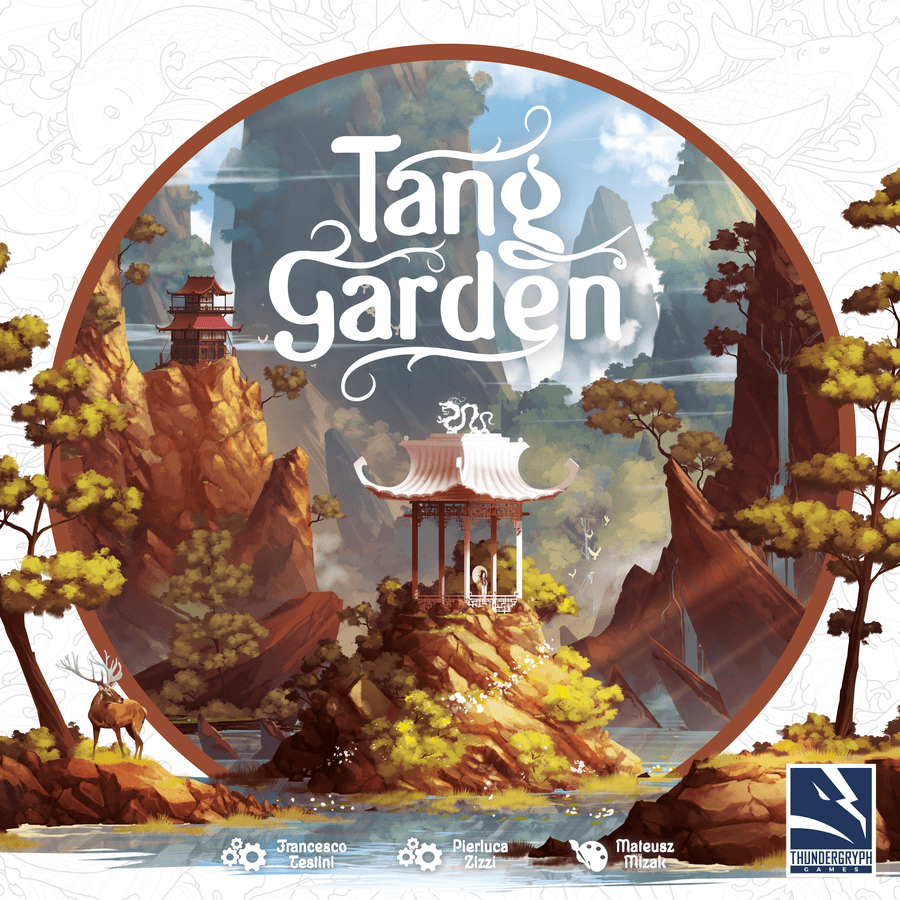 They say gardening can be relaxing. Personally, we’ve never had a green thumb, but Tang Garden really lets us see the appeal.

Taking place during the Tang Dynasty in China, each player will take turns constructing the garden, balancing elements, decorations, and panoramas in order to create the most aesthetically pleasing experience for the nobles who will visit it.

In turn, players will place tiles on the board, trying to match elements so that they can earn a new character (representing a noble) to place. Since these characters are necessary to score points at the end of the game, efficiently placing the tiles is important to a winning strategy. Players can also draw decoration cards, placing the available decorations in the garden and trying to build a complete collection of them. Panorama pieces are placed on the edge of the play area, representing the beautiful vistas in the distance that can be admired by the characters in the garden. At the end of the game, all of these considerations got towards earning a player prestige points, which they will need to amass to win the game. 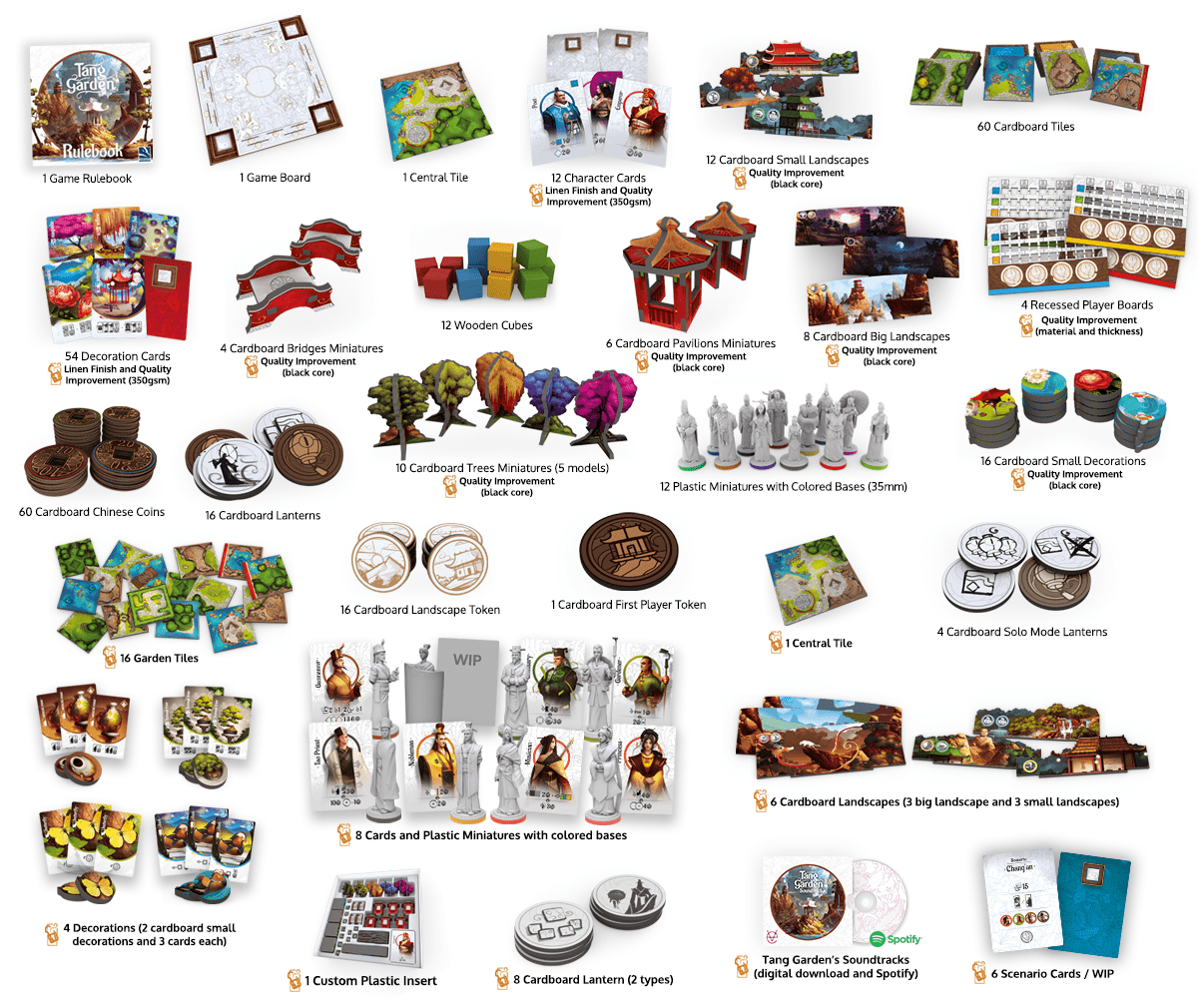 Continuing the trend we saw above in Iwari, Tang Garden is filled with beautiful tactile elements that build up the board in three dimensional space, turning the game into its own little art piece every game. The trees, pagodas, and bridges are constructed out of cardstock, making little papercraft-esque decorations that fill the garden. The plastic miniatures representing the game’s characters get to be placed among these decorations just as if they were actually strolling through the garden. It may be a little thing, but the way that the efforts of the players are represented by the physical expansion of game components is a nice touch to a medium that usually requires a good degree of imagination to bring it to life.

Pre-orders
Alex, Editor Errant
Be the first to comment...