Happy 2020! A new year means new games, and 2020 is already boasting a promising slate of fresh titles. Here’s a few that have caught our eye. 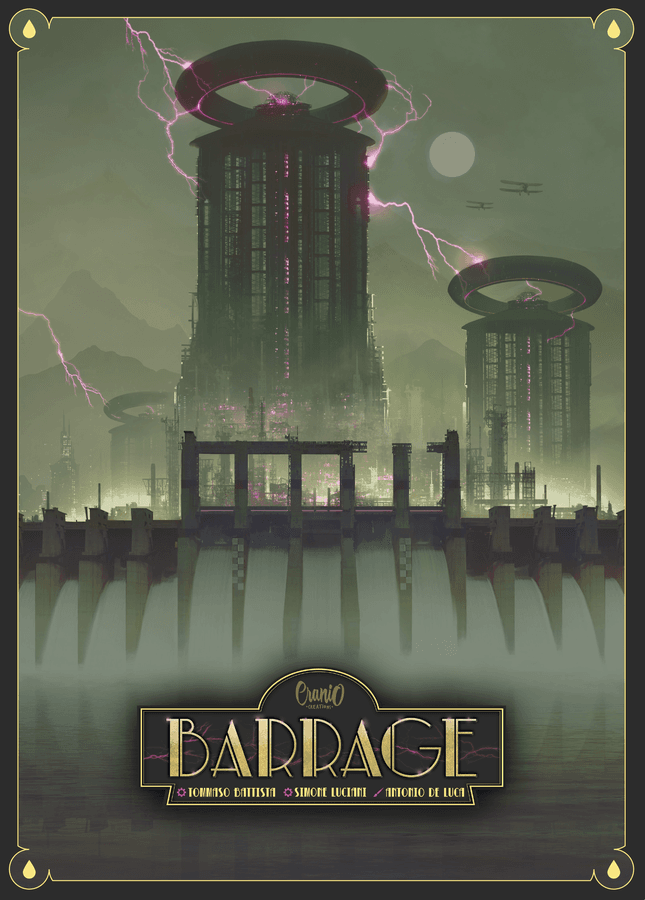 It’s the 1930s. The world is in the grips of a Great Depression that sees countless people afflicted with unemployment and poverty. But despite the mass suffering of the workforce, industrial progress forges ahead. In order to meet the demand for energy, massive hydroelectric projects, such as the Hoover Dam, are constructed.

In Barrage, players take on the role of the developers and owners of hydroelectric plants, competing against each other to exploit the natural water resources of an alpine region in order to amass a fortune. Over five rounds, players will compete to fulfill specific contracts, damming rivers and building powerhouses to exploit the redirected water. Engineers can be sent to enhance the machinery of your installations, increasing their efficiency and production.

Two mechanics put a unique spin on what is already a solid economic management game:

The first is the Construction Wheel, a component that holds your spent actions. The wheel rotates as the game plays out, so the actions return to you after a time. Planning ahead and developing a sense of the game’s pacing are skills integral to succeeding at Barrage.

The second is the board itself. Because hydroelectric power relies on shared natural resources, players will likewise have to share the same waterways with one another as they compete. Strategically daming certain waterways, or placing your powerhouses on the runoffs from others, will have players literally jostling for position, trying to outmaneuver each other. 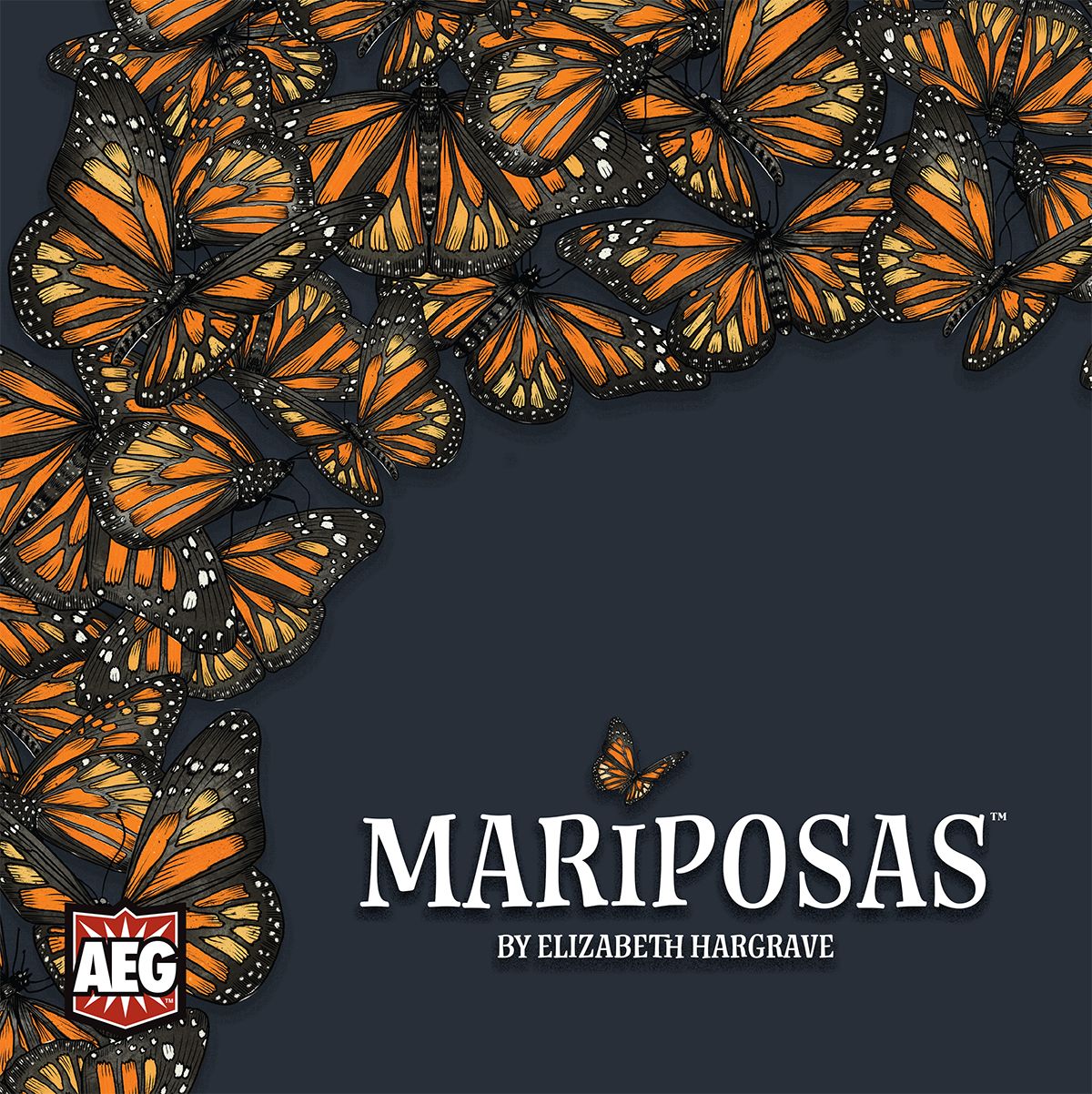 When it comes to migration, few creatures do it with more spectacle than the monarch butterfly. Every year they make the migration, travelling south to Mexico in the fall, and up north to eastern North America in the spring. The sight of millions of monarchs making the journey is one of the most beautiful in nature.

Mariposas (titled after the Spanish word for butterflies) lets players take part in this remarkable cycle of life. Designed by Elizabeth Hargrave (the designer of Wingspan), the game takes place over three seasons (spring, summer, and fall). In each of the seasons, players will be tasked with managing their butterfly’s movement, going north in the spring, spreading out in the summer, and migrating south in the fall. Players are scored at the end of every season for completing various goals, such as migrating to a specific city, landing on different sets of coloured spaces, or by making sure that none of your butterflies are below a certain space when the season turns. 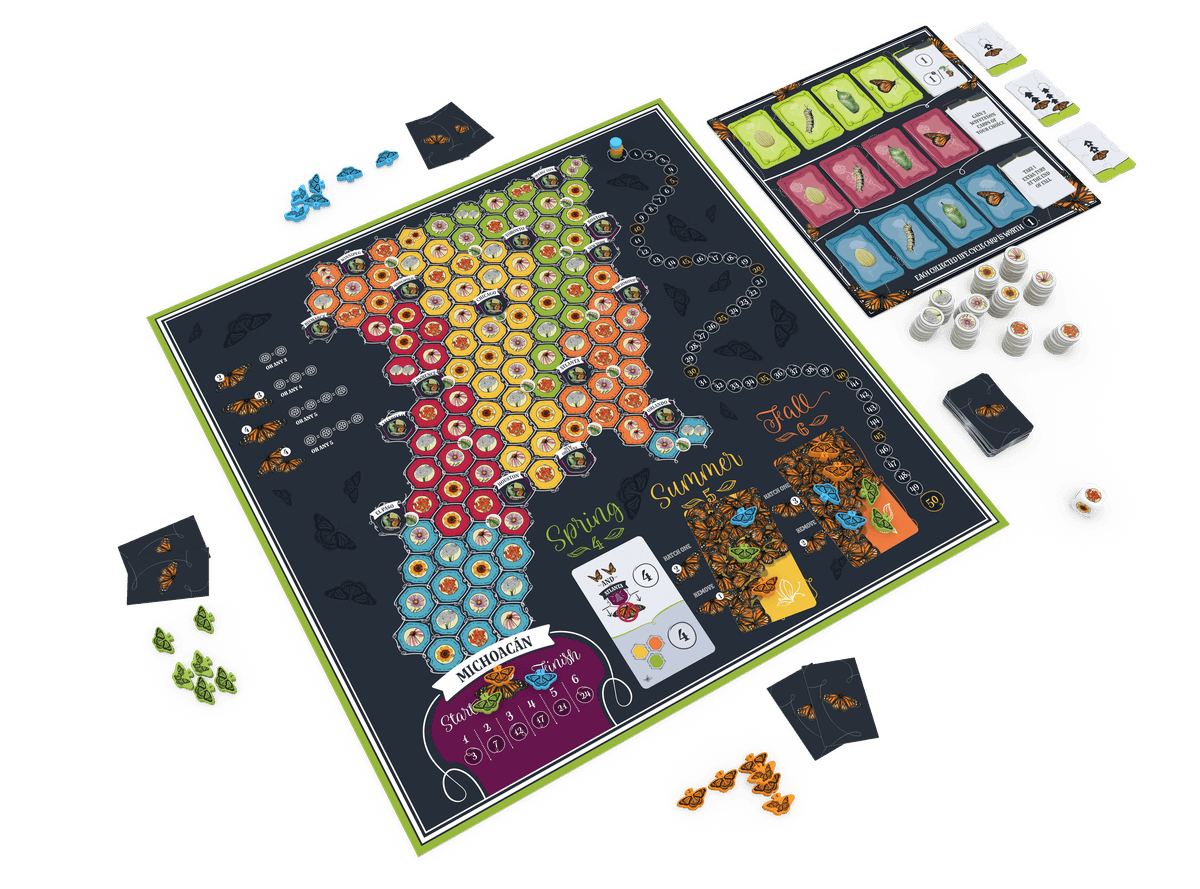 Since no individual butterfly lives long enough to make the entire round trip, you will also have to manage your butterflies’ reproduction. Later generations have the ability to turn into “double butterflies” (representing the population growing with each generation) which count doubly towards scoring goals.

In addition to its clever gameplay, Mariposas is also an absolute feast for the eyes. Every bit as colourful as its subjects and with clean and simple iconography, we’re excited to see what this game looks like set up on the table. 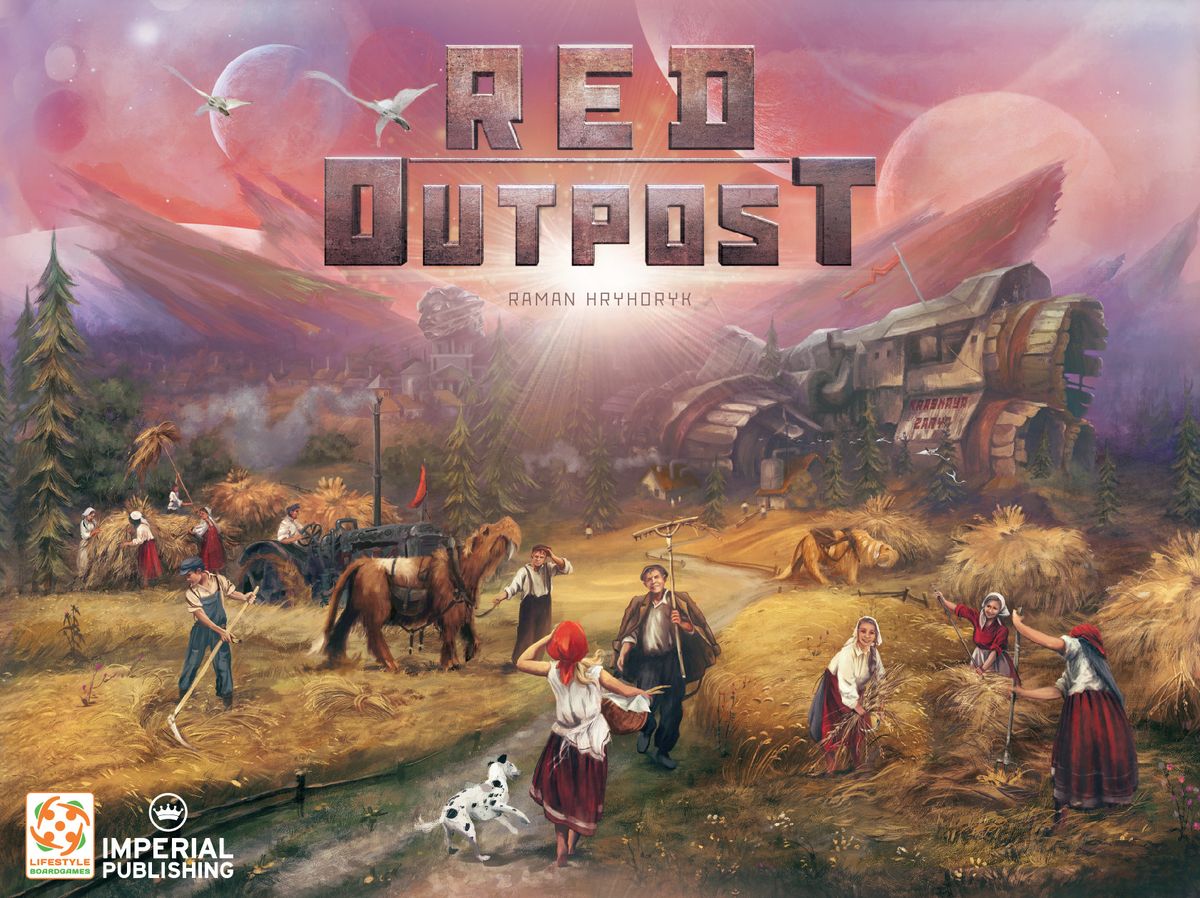 Red Oupost is based on a stellar sci-fi premise: years ago, the USSR launches a secret colonization mission into deep space, its crew establishing a small commune on a distant world. Over the years, the descendants of this mission must manage and grow this community on an alien world.

As players, you take on the role of the leaders of this community. Each player takes turns placing a worker on the various spaces of the colony, producing different resources or outcomes depending on where they are placed. Meeting certain production goals earns you victory points as well as crystals, which can be used during the game or saved until the end in order to score additional victory points. 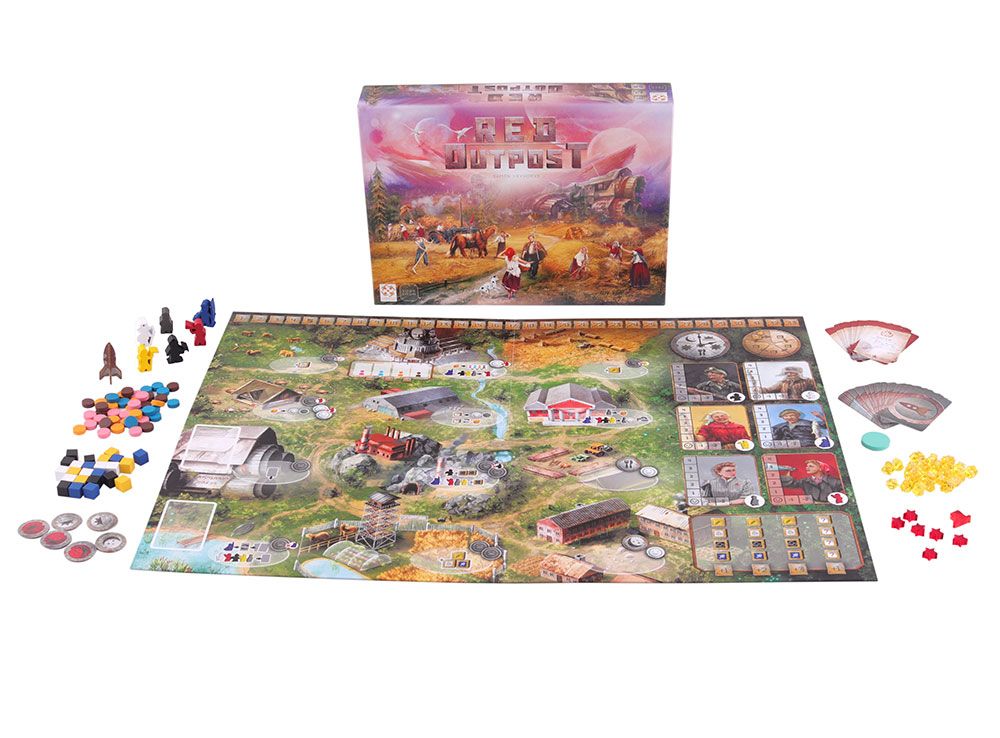 Players will also gain victory points at the end of the game depending on how much they contributed to building the “Palace of the Soviets” (based off of an actual building that was planned but never constructed by the USSR), a monument to the glory of Soviet communism.

But the mechanic that sets Red Outpost apart from other, similar worker placement games is that of the workers’ moods. Performing certain jobs will lower the worker’s mood, making them less productive when they are next used. Depending on your strategy, this tradeoff may be worth the material gain you earn for it (the Labour Camp, for instance, lowers a worker’s mood but allows them to produce extra resources) or, because all players control the same pool of workers (in true communist fashion), you may decide to reduce the mood of a worker that you know your rival needs during the next phase. 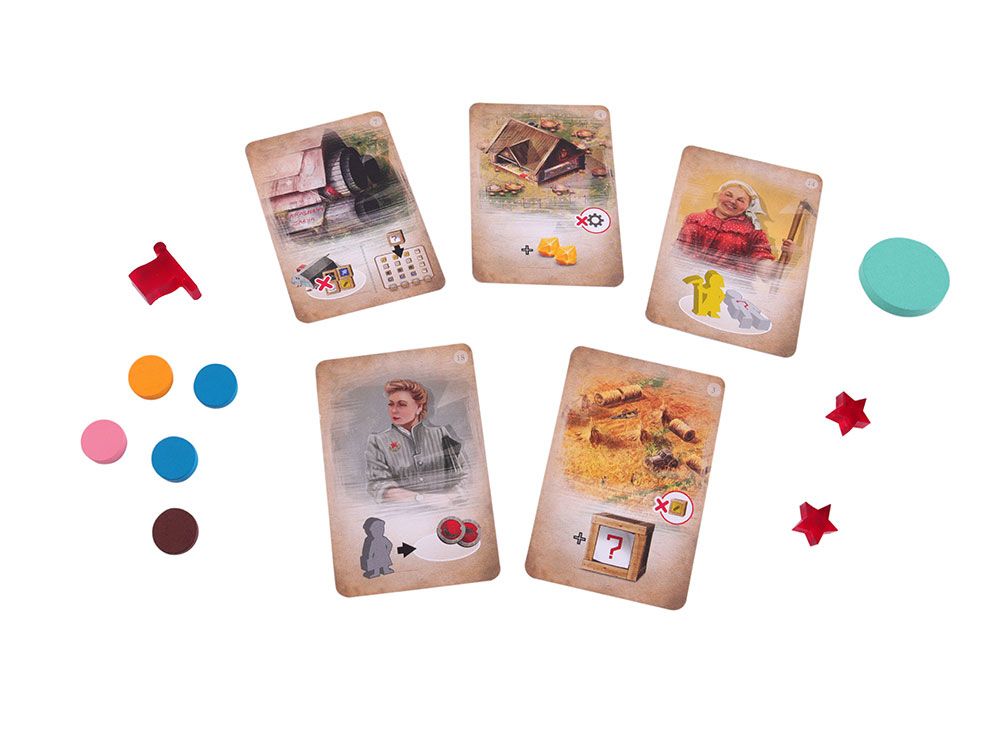 Another point of note is the game’s art style. The character portraits and component design take influence from old Soviet propaganda, depicting the people of the outpost in a Soviet Realist artistic style. Unlike some other worker placements, the theme of the game is front and center, both in its gameplay and aesthetic.

Can you and your friends forge a new, glorious motherland on a distant world? Don’t say nyet to Red Outpost!

r
RecenzjePlanszowek.pl
Of the board games shown here, I'm most interested in the title "Mariposas". I hope it will be available in Poland. Then I will definitely review it with great pleasure. Best wishes Recenzje Gier Planszowych