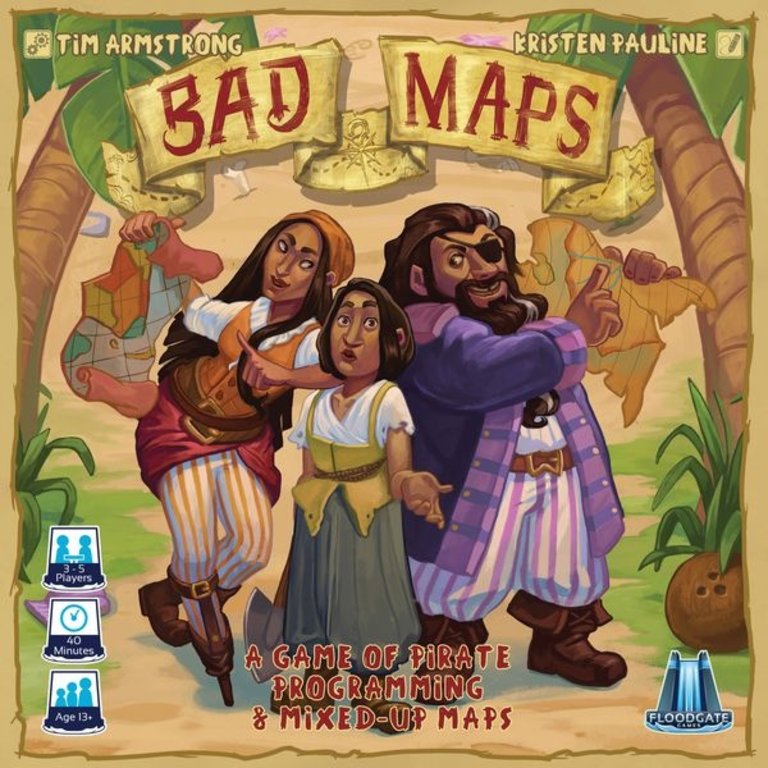 X marks the spot as you and other pirate captains piece together scraps of maps, sending minions stumbling around the island - leading some to traps and others to treasure.
But beware, other captains’ instructions may work against you. Yargh! Are you a clever captain who can turn Bad Maps into Good Fortune?

Bad Maps is a game of pirate programming and mixed up maps for 3 to 5 players that plays in about 30 minutes.

Over the course of 2 rounds, players lay out pieces of treasure maps, collectively forming instructions for minions to follow.

Each round has some map cards placed face up, and others face down -- hiding the card’s instruction, but showing its type. Minions follow these instructions, stumbling their way along as they collide and fall into pits.

Players score victory points each round based on which minions are closest, or sometimes furthest, from the treasure.

After the first round, Minions dig pits where they ended, pull up their bootstraps, and start all over again. During the second round, the stakes are higher and the island is more treacherous.

In the end, the captain who pieces together the best treasure maps will be victorious in Bad Maps!

Back to home
Portal Games

C$59.97
Out of stock
Article code 5902560380064
Robinson Crusoe: Adventure on the Cursed Island is an adventure game for you and your friends to play as castaways on an uninhabited island.

Fireball Island: The Curse of Vul-Kar

Fireball Island: The Wreck of the Crimson Cutlass Expansion

C$35.67
In stock
Article code XYZWRECKCRIMCUT
You’ve made your way to the wrecked pirate ship through a mysterious cave. Now, run across the deck in search of treasure or grab a snapshot from the Captain’s wheel. But watch out for cannonballs and ember marbles! This expansion adds a bit of cutthroat

Quickview
Restoration Games
Fireball Island: The Wreck of the Crimson Cutlass Expansion
You’ve made your way to the wrecked pirate ship through a mysterious cave. Now, run across the deck in search of treasure or grab a snapshot from the Captain’s wheel. But watch out for cannonballs and ember marbles! This expansion adds a bit of cutthroat
C$35.67
Lay Waste Games

out of stock
Quickview
Rustik
Puck Pirate
Bomb the ship! Be the first to destroy the enemy pirate ship, sending all cannonballs to his camp!
C$37.95
Roxley Games

Quickview
Roxley Games
Dice Throne: Season Two - Artificer v Pirate
Expand your game of Dice Throne with two new heroes!
C$23.97
By using our website, you agree to the use of cookies. These cookies help us understand how customers arrive at and use our site and help us make improvements. Hide this message More on cookies »