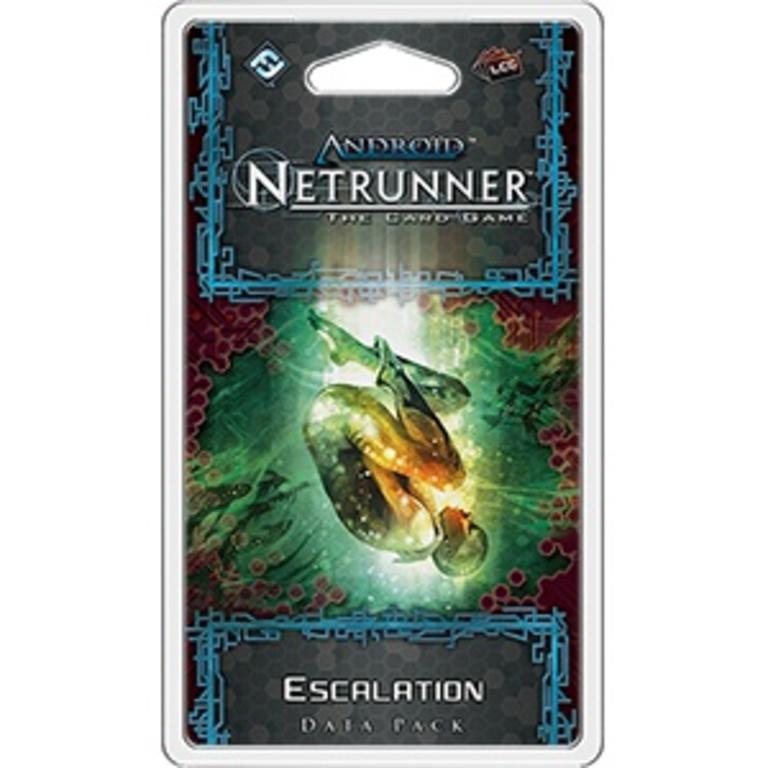 C$22.95
Fantasy Flight Games
In stock
Article code 841333101008
Escalation offers a look at Corps more aggressively locking down their assets and hunt down their rivals. Explores New Angeles in the wake of Twenty-Three.
Share this product:

PLEASE NOTE:  NETRUNNER PRODUCT IS NOT KEPT IN THE RETAIL STORE.  FOR IN STORE SERVICE PLEASE ORDER ONLINE FOR IN STORE PICK UP AND ALLOW 4 DAYS FOR A FOLLOW UP EMAIL ADVISING YOUR ORDER IS READY.

Escalation is the third Data Pack in the Flashpoint Cycle for Android: Netrunner, and its sixty new cards (three copies each of twenty different cards) explore New Angeles in the wake of the Twenty-Three Seconds incident.

The city has plunged into chaos. The chaos has led to rioting. Amid the rioting, people have died. Some died on the streets, in bloody encounters with PriSec. Some died quietly, targeted by assassins. Some simply disappeared. Yanked off the grid in an age when the act of skirting surveillance and the ever-present Network is nearly but not completely impossible.

Carrying us deeper into this chaos and the tensions pulling New Angeles apart at the seams, Escalation offers a look at Corps more aggressively locking down their assets and hunt down their rivals. Runners gain new decoders and new incentive to uncover and reveal the truth of the Corps' activities. But amid the escalating tensions, if the Runners hack the Corps, can they still survive?

There's plenty of meat damage, net damage, and brain damage on the menu, along with cards that make utter trash of the Runner's rig and stack. Finally, Escalation unveils two new, aggressively-minded identity cardsone for Jinteki, and one for the Anarchs that started the whole mess.

C$19.95
In stock
Article code 841333100988
At the beginning of the Flashpoint Cycle, 23 Seconds provides us our first glimpses of the Android world after the Twenty-Three Seconds incident.

C$18.95
In stock
Article code 841333101015
Intervention and its sixty cards (three copies each of twenty different cards) deposit you in the streets of New Angeles in the wake of the Twenty-Three Seconds incident.

C$15.95
In stock
Article code 841333101039
Quorum gives us sixty new cards (three copies each of twenty different cards) that focus on getting back to business as usual.

Quickview
Fantasy Flight Games
Android Netrunner LCG: Flashpoint Cycle 6 - Quorum Data Pack
Quorum gives us sixty new cards (three copies each of twenty different cards) that focus on getting back to business as usual.
C$15.95
By using our website, you agree to the use of cookies. These cookies help us understand how customers arrive at and use our site and help us make improvements. Hide this message More on cookies »