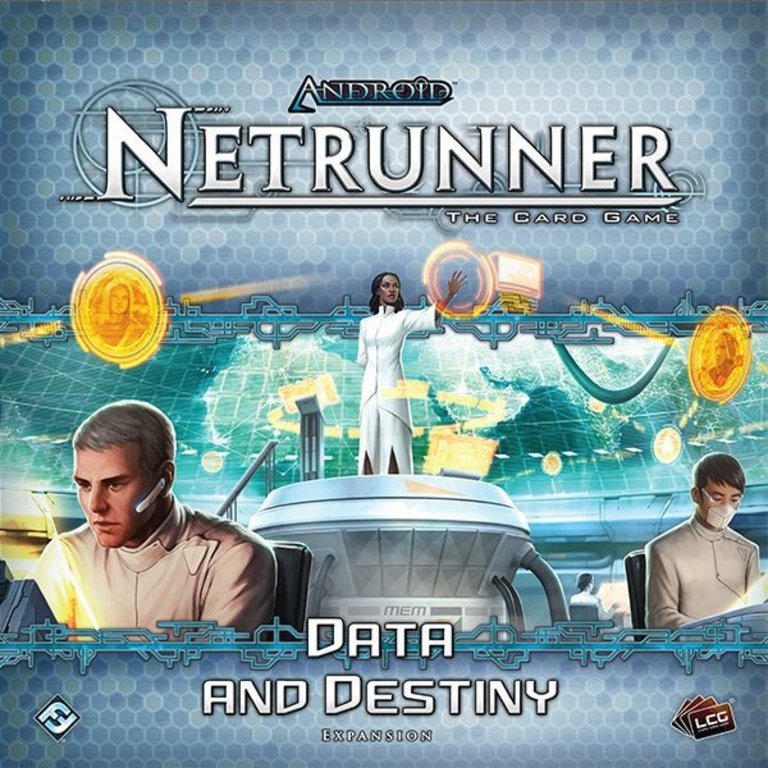 PLEASE NOTE:  NETRUNNER PRODUCT IS NOT KEPT IN THE RETAIL STORE.  FOR IN STORE SERVICE PLEASE ORDER ONLINE FOR IN STORE PICK UP AND ALLOW 4 DAYS FOR A FOLLOW UP EMAIL ADVISING YOUR ORDER IS READY.

Data and Destiny is the fourth deluxe expansion for Android: Netrunner The Card Game, focusing on media giant NBN and three groundbreaking Runners.

In the world of Android: Netrunner, knowledge is just about everything, and no one has more or better access to the knowledge that humanity has collected and stored on the network than info-giant NBN. After all, not only does NBN boast the most pervasive data network ever imagined, it literally controls the infrastructure, media, and messages that define modern society. Accordingly, amid the 165 cards from Data and Destiny (three copies each of fifty-five different cards), you'll find a wealth of new media-focused assets, agendas, and resources. You'll be selectively targeted by new advertisements and tagged by new ice as NBN launches the initiatives of three new divisions, each of which rolls out with a new identity card.

Meanwhile, even as Data and Destiny lends new strength to NBN's efforts to shape the world in which we live, it unleashes chaos upon that world in the form of three new Runners. One is a network security officer sent to hack servers with the full blessings of Globalsec. One is a bioroid mysteriously set free from the Third Directive. One is a mysterious and predatory presence on the net, devouring all that it encounters. Each represents a unique take on the Runner's experience and, more than that, each introduces a new Runner mini-faction, so that for the first time since the Core Set, Data and Destiny explores brand new Runner paradigms.

Please note: Due to limited stock numbers there is a purchase limit of 1 per customer for this item.

C$14.95
In stock
Article code 841333100315
Kala Ghoda is the first Data Pack in the Mumbad Cycle for Android: Netrunner, which introduces players to the future of the Indian Union

C$20.95
In stock
Article code 841333100322
Passions flare and Jinteki faces a game-changing crisis as the issue of clone rights rises to prominence during the Indian Union's national elections.

C$9.95
In stock
Article code 841333100339
This pack of sixty new cards (including a complete playset of nineteen different cards) is full of snooping, blackmail, coercion, and seedy political dealings

C$14.95
In stock
Article code 841333100360
Featuring some of the most potent and deck-defining cards from the whole Mumbad Cycle, Fear the Masses carries the cycle to its climactic conclusion.

C$19.95
In stock
Article code 841333100988
At the beginning of the Flashpoint Cycle, 23 Seconds provides us our first glimpses of the Android world after the Twenty-Three Seconds incident.

C$14.95
In stock
Article code 841333101015
Intervention and its sixty cards (three copies each of twenty different cards) deposit you in the streets of New Angeles in the wake of the Twenty-Three Seconds incident.

C$18.95
In stock
Article code 841333101008
Escalation offers a look at Corps more aggressively locking down their assets and hunt down their rivals. Explores New Angeles in the wake of Twenty-Three.

Quickview
Fantasy Flight Games
Android Netrunner LCG: Flashpoint Cycle 3 - Escalation Data Pack
Escalation offers a look at Corps more aggressively locking down their assets and hunt down their rivals. Explores New Angeles in the wake of Twenty-Three.
C$18.95
By using our website, you agree to the use of cookies. These cookies help us understand how customers arrive at and use our site and help us make improvements. Hide this message More on cookies »