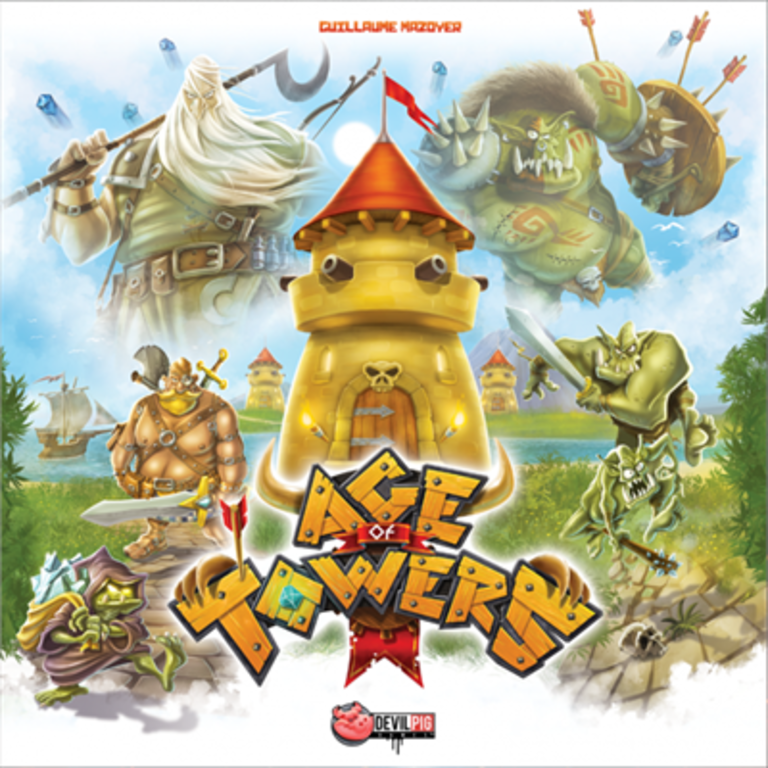 C$83.95
Devil Pig Games
In stock
Article code 1944666610014
The exciting gameplay of your favorite tower defense games on the tabletop!
Share this product:

You've just found a mine filled with precious energy crystals! Precisely those you use for your daily magic. The problem here is that you've also stumbled onto a horde of monsters! And to make things even worse, three other cities seem to have discovered the existence of your mine as well. As they rush into danger to mine the precious crystals, you have no choice but to join in the fray...

Age of Towers brings the exciting gameplay of your favorite tower defense games onto the tabletop! Playable either solo or with up to four players, Age of Towers sees you and your opponents competing to defend your cities against the oncoming wave of monsters by constructing defenses, placing traps, and funneling those beasts towards your opponents' cities!

In more detail, each turn has three phases: night, dawn, and day. During night, the event card is applied and monsters progress on your path (with each type having a different movement value). Two more monsters (or your boss) appear on your path. During dawn, the towers can attack one monster of a particular type on one of the four adjacent spaces, or the boss. During day, each player can choose one action from the four available, then they can take one more action, whether the same or different. The actions available are:

Each monster type has a movement value (1-3 spaces) and maybe a special ability; all core box monsters have 2 life points. The boss, who is not a monster, is harder to kill as it has 10 life points; when a player successfully kills it, the game ends. Each time a monster or a boss leaves your path to reach your city, you lose a number of city guards equal to their movement value. You begin at 15, and even if you lose your last one, you don't lose the game; you will just earn fewer victory points than other players.

After the game end, each player adds their victory points from three sources: Number of remaining city guards, amount of damage to your boss, and achievements (which are drawn randomly at the beginning of the game).

Age of Towers: The Winx increases the stakes with more quest and event cards to add to your Age of Towers base game, along with more monster content and materials for a fifth player. Defend your city and mine those crystals as fast as you can as more competition is on the way!