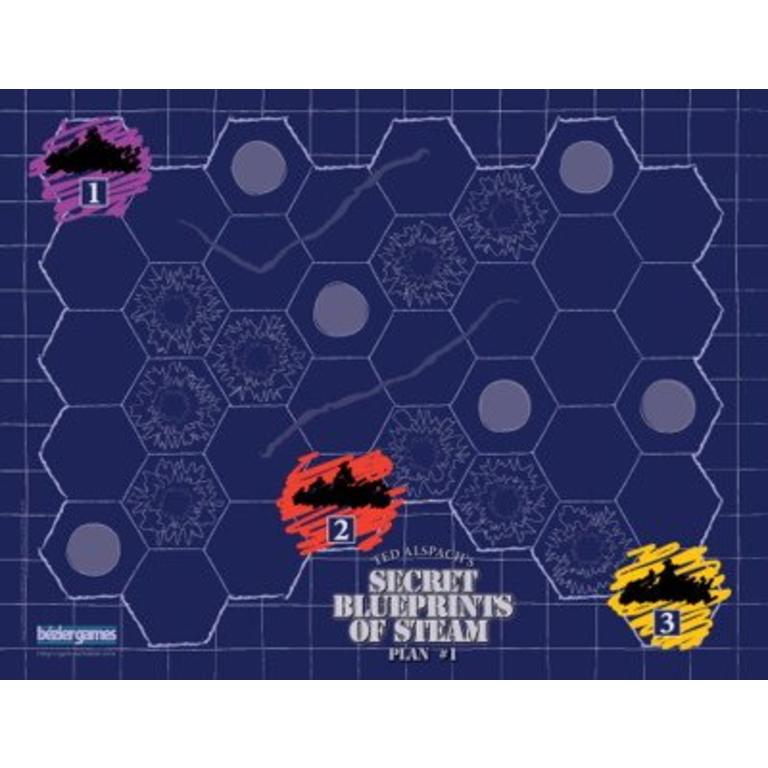 Age of Steam Expansion: Secret Blueprints of Steam Plans 1 & 2 Secretly devise the best plan to create a profitable railroad while your competitors do the same, sharing a common pool of actions and stealing goods directly from other players' maps. Download the rules here. This expansion has eight different maps and as a bonus includes full color replacement mats for Income and Goods Growth. This full color, heavy duty, professionally designed and printed expansion contains the following special features:

Setup Strategy: At the beginning of the game, each player may determine where their starting goods are placed, allowing them a level of strategy that truely defines the rest of the game.

Simultaneous Track Building and Goods Delivery: Each player builds track and delivers goods simultaneously, so there's no waiting for other players to make their moves. As a result, most games take less than an hour to play, with absolutely no downtime!

Secret Goods, Track and Money: Each player plays with his map hidden from other players, so no one but himself knows what track is being build, what goods are available for delivery, and most importantly, how much money he has!

Cube Stealing via Production: The player with the Production action gets to take cubes directly from other players' maps, and add them to the goods growth chart directly, adding a unique layer of interaction to gameplay.

8 Unique maps: Each plan has four equally balanced variations, for a total of 8 unique maps!

Includes replacement Goods Growth and Income player mats: High quality, full color income and goods growth replacement mats...so you don't have to use those plain, hard-to-read ones that came with the original game. These mats were designed to work with a wide variety of expansions, including the brand new 8-player Central New England map.