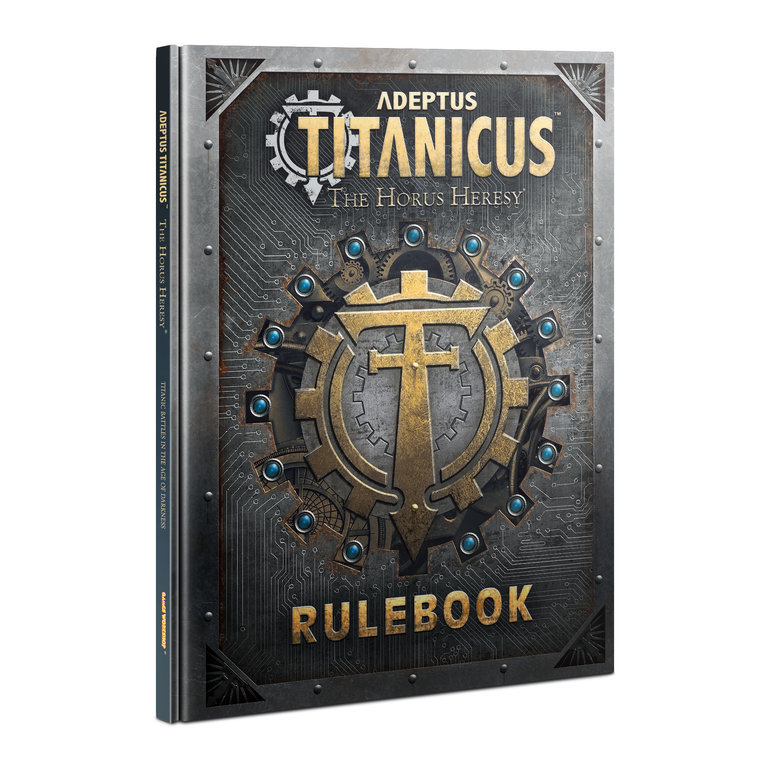 C$48.00
Games Workshop
Out of stock
Article code 9781839061028
Adeptus Titanicus is a tabletop game of devastating combat between awe-inspiring god-machines, set during the civil war that tore the galaxy apart.
Share this product:

The galaxy is in flames. The Emperor’s glorious vision for Humanity is in ruins, His armies locked in brutal civil war. The greatest of these bitter combatants are the towering god-engines of the Adeptus Titanicus. Those Titan Legions that remain loyal to the Emperor of Mankind fight boldly to stem the tide of treachery, holding the line on countless worlds as the Warmaster’s forces advance inexorably on Terra. The Traitor Titan Orders march at the vanguard of the Warmaster’s hosts as they seek to bring the Imperium to its knees in the name of their twisted cause…

Adeptus Titanicus is a tabletop game of devastating combat between awe-inspiring god-machines, set during the civil war that tore the galaxy apart. Two players take control of a variety of Titans – colossal, bipedal war engines covered in thick armour and weapons which can level a city in a single salvo. It's a strategic challenge in which you pit your skill and cunning against your opponent in a battle to the death; a test of tactical skill demanding the management of the resources at your disposal, determining the optimal reactions to the evolving state of the battlefield.

This hardback rulebook is your guide to the game, packed with all the rules you need to get started. Grab this, a handful of Titans, and some accessories, and your conquest of the galaxy can begin!

CONTENTS
This 96-page hardback book contains:
– The Imperium of Mankind: an overview of the galaxy, the Titan Legions, and the Horus Heresy
– Notable Engine Wars: A record of infamous Titan battles from the Age of Darkness
– Basic Rules: The key rules you need to play the game, from rounds and phases to movement, combat and damage, plus the Titanic Clash mission to get you started
– Advanced Rules: Expanded rules for experienced players, including Orders, Stratagems, and how to use squadrons of Titans and support Banners of Imperial Knights
– Optional Rules: Additional ways to play that add complexity for a richer experience, including transferring power, overloading void shields, and stray shots
– Assembling a Battlegroup: How to build your army, including a variety of maniples and personal traits for your Princeps Seniores
– Fighting a Battle: An explanation of Open, Narrative, and Matched Play, advice on choosing missions, setting up the battlefield, and selecting Stratagems
– Missions: Six missions which can be used for Open Play or Narrative Play games, each based on an historic battle
– Matched Play: How to play balanced competitive games, including the Meeting Engagement mission, different types of deployment, and victory conditions
– Legions of the Adeptus Titanicus: Descriptions and rules for Legio Gryphonicus and Legio Tempestus, each with its own Legion Trait, specific wargear, and choice of Princeps Seniores’ personal trait

C$53.00
Out of stock
Article code 5011921127283
This kit comes with enough components to build three Questoris Knights armed with a wide variety of weapons, along with alternate heads.

out of stock
Quickview
Games Workshop
Adeptus Titanicus: The Horus Heresy
The galaxy is in flames. The Emperor’s glorious vision for Humanity is in ruins, his armies locked in brutal civil war.
C$200.00
Games Workshop

C$85.00
Out of stock
Article code 5011921112098
The bestial appearance of the Warhound Scout Titan reveals its purpose to the enemy – a savage hunter in the vanguard of the Titan Legions.

out of stock
Quickview
Games Workshop
Adeptus Titanicus: Shadow And Iron
Far from Terra, the Horus Heresy raged in the darkest places of the Imperium – and some of the brightest.
C$48.00
By using our website, you agree to the use of cookies. These cookies help us understand how customers arrive at and use our site and help us make improvements. Hide this message More on cookies »