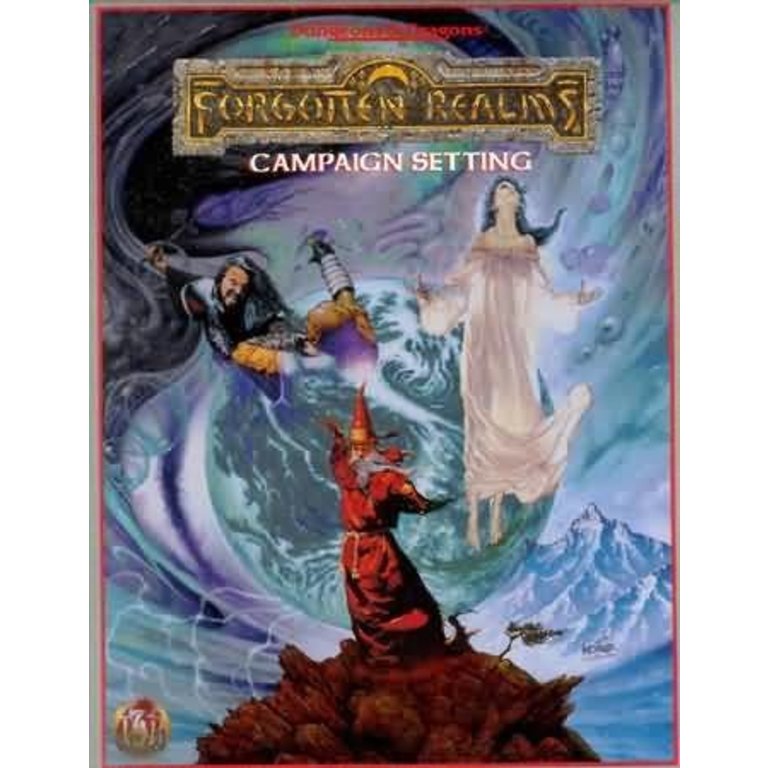 C$150.00
TSR Inc.
Out of stock
Article code 9781560766179
It is the most popular fantasy campaign in history. Well met, traveler, and welcome to the Forgotten Realms!
Share this product:

It is a world where the gods have walked and fantastic armies clashed. It is the home of Elminster, Alias, Azoun, Khelben, and Drizzt the dark elf. It is the most popular fantasy campaign in history. Well met, traveler, and welcome to the Forgotten Realms!

Designed for the AD&D game, the new FORGOTTEN REALMS Campaign Setting is a major expansion and complete revision of the original, best-selling boxed set. This set contains everything that a player or Dungeon Master needs to launch into a world of adventure and imagination.

A Grand Tour of the Realms – a 128-page book, concentrating on the Heartlands, the land of the Dales, Cormyr, and Waterdeep, and chock full of useful information about other significant Realms locations on the continent of Faerûn.

Running the Realms – a 64-page guide to the Forgotten Realms for the Dungeon Master, showing how to create a Realms campaign, and giving details about secrets, NPCs, and deities of the Realms.

Shadowdale – a 96-page book, presenting the most important town in the Realms as the basis of an ongoing campaign, including a new introductory adventure, "Beneath the Twisted Tower."

8 MONSTROUS COMPENDIUM pages covering the deadliest creatures of the Realms!

4 all-new four-color maps, two of eastern and western Faerûn, and two smaller-scale, detailed maps of the heartlands of the Realms.

The revised FORGOTTEN REALMS Campaign Setting is both a perfect introduction and a concise restructuring of the earlier boxed set, not to be missed by either long-time fans or newcomers to the grandest campaign setting of all!