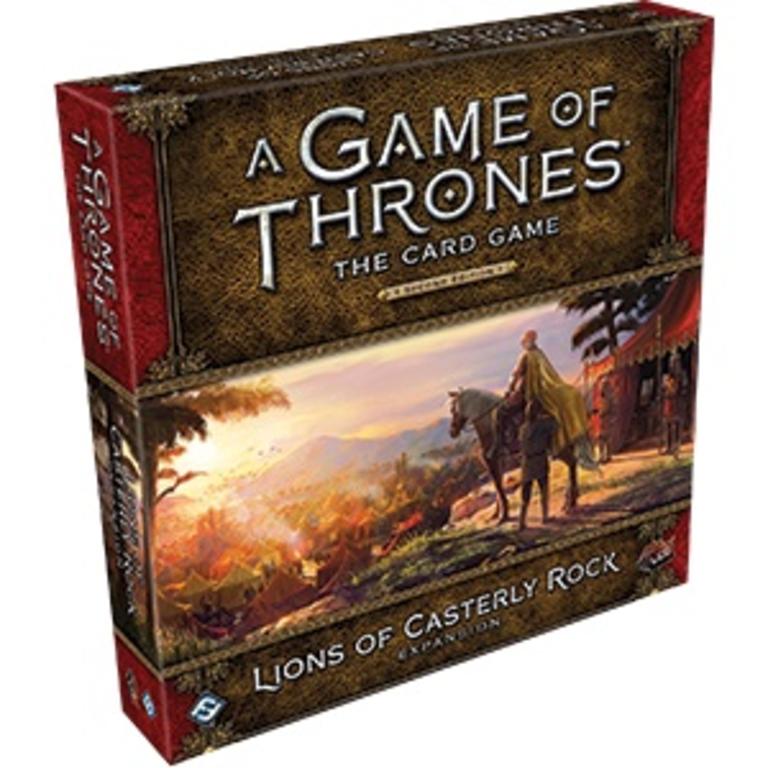 C$36.95 C$27.71
Fantasy Flight Games
In stock
Article code DNR-841333101671
Lions of Casterly Rock, the second deluxe expansion for A Game of Thrones: The Card Game, invites you to take your place among the storied names of House Lannister.
Share this product:

My brother is undoubtedly arrogant, Tyrion Lannister replied. My father is the soul of avarice, and my sweet sister Cersei lusts for power with every waking breath. I, however, am innocent as a little lamb.
George R.R. Martin, A Game of Thrones

Tywin Lannister: Warden of the West and lord of his House. Ser Jaime Lannister: the Kingslayer and Lord Commander of the Kingsguard. Cersei Lannister: Robert Baratheons queen, Crown Regent for Joffrey Baratheon, and one of the most beautiful women in the realm. Tyrion Lannister: Hand of the King and defender of Kings Landing. Across Westeros, the very names of the Lannisters command instant recognition and respect. Tales of their wealth are legendarymatched only by stories of their cunning and ruthlessness. From the Sunset Sea to the Iron Throne, the lions of Lannister hold Westeros in a golden fist.

Lions of Casterly Rock, the second deluxe expansion for A Game of Thrones: The Card Game, invites you to take your place among the storied names of House Lannister. Within this expansion, the Lannisters explore new themes, launching an ambush with their Clansman allies, redoubling their focus on the intrigue challenge, and sending out marauders to pillage the lands of Westeros. Youll also find new versions of the most iconic Lannister characters, including Tywin Lannister, Cersei Lannister, Ser Jaime Lannister, and Tyrion Lannister. Of course, while House Lannister holds the spotlight here, youll also gain two new non-loyal cards for each other faction with new characters entering the game for the first time, including Edric Storm, Victarion Greyjoy, Trystane Martell, and Jeyne Westerling. Finally, youll have the chance to reshape your plot decks with seven new plots (six neutral and one loyal to House Lannister).

A Game of Thrones LCG (2e): Deluxe Expansion 3 - Watchers On The Wall

-25%
Quickview
Fantasy Flight Games
A Game of Thrones LCG (2e): Deluxe Expansion 4 - House of Thorns
House Tyrell surges into the light with House of Thorns, a new deluxe expansion for A Game of Thrones: The Card Game!
C$36.95 C$27.71
By using our website, you agree to the use of cookies. These cookies help us understand how customers arrive at and use our site and help us make improvements. Hide this message More on cookies »