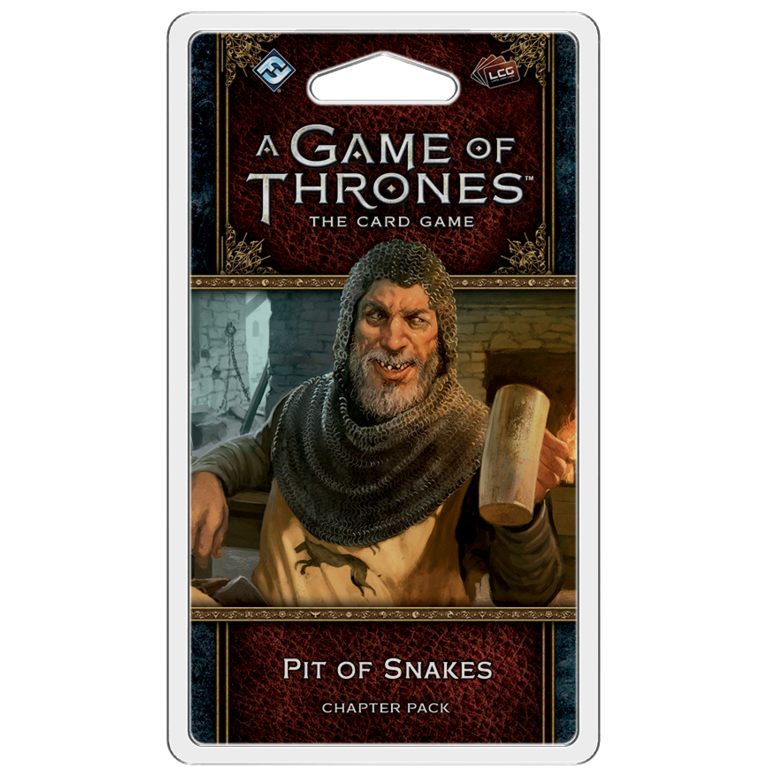 C$19.95
Fantasy Flight Games
Out of stock
Article code 841333107635
Pit of Snakes is the third Chapter Pack in the King's Landing cycle for A Game of Thrones: The Card Game.
Share this product:

“We need a voice in council, an ear at court. Be careful, though. King’s Landing is a pit of snakes.”
–Doran Martell, A Dance with Dragons

From the first page of A Game of Thrones to the last line of A Dance with Dragons, A Game of Thrones: The Card Game has followed the lives of those pursuing the Iron Throne. You have had the chance to lead your favorite characters into battle in the fields and courts of Westeros, and now, in the King’s Landing cycle, you leave the constraints of time behind to step into the world of A Song of Ice and Fire and explore the capital of the Seven Kingdoms like never before.

As with other Chapter Packs in this cycle, you will find that Pit of Snakes offers you three copies each of twenty distinct cards, providing each faction with new cards for their House as well as new neutral cards that any player can turn to their advantage. With new versions of favorite characters, as well as a new City plot and the continued development of the shadow keyword that was first introduced in the fifth cycle of A Game of Thrones LCG, Pit of Snakes will ensure that you are ready to face the deadliest opponents, no matter which House you pledge your sword to!

Before the Great Sept

As you continue to step through the streets of King’s Landing, you will have the chance to visit key locations like the Statue of Baelor (Pit of Snakes, 58) and behold the glory of the most popular religion in the Seven Kingdoms with a variety of neutral cards to help you build a deck around The Seven. Tracing their founding to even before Baelor the Blessed, The Most Devout (Pit of Snakes, 57) are a council of the highest-ranking septas and septons of the Faith of the Seven who are instrumental in selecting the High Septon. As religious leaders to King’s Landing, The Most Devout become more powerful as they add more sheep to their flock, gaining power if your opponent attempts to bring more than one character into play each phase—thus dissuading your opponent from marshaling too many characters or relying too heavily on ambush or shadows. If you can keep these holy men and women sheltered for a few rounds, playing Compelled by the Faith (The Faith Militant, 100) at the opportune moment will let you move this power to your faction card.

If you control either of these sacred new cards, you may choose to issue The Faith's Decree (Pit of Snakes, 59). This event lets you to stop your opponent from triggering the abilities of a non-plot, non-agenda card of your choice for an entire phase, meaning that if you can predict your opponent's intentions, you can deny them the use of that card. Perhaps you want to ensure your opponent can't recur characters with Flea Bottom (Oberyn's Revenge, 98), or maybe you want to stop a potent threat like Drogon (In Daznak's Pit, 93) from destroying your army. With the strength of The Seven at your beck and call, you can seize power much more easily.

An Ear in Court

As A Game of Thrones: The Card Game moves away from the plot of A Song of Ice and Fire, you will find key characters crossing paths within the same Chapter Pack who would never have encountered one another otherwise. The head of House Stark at the start of the series, Eddard Stark (Pit of Snakes, 41), has never forgotten the gravity of taking a man’s life, but he will do whatever he must to protect his House. Thus, when duty demands during the dominance phase, Eddard may kneel to kill a character with a printed cost of four or lower, provided he is surrounded by his kinsmen on the battlefield.

While Eddard Stark has a military and power icon like his previous appearances in the Core Set (Core Set, 144) and Wolves of the North (Wolves of the North, 1), his honor has always prevented him from being able to easily participate in intrigue challenges, until now. In Pit of Snakes, House Stark gains the new attachment Malleon's Tome (Pit of Snakes, 42), the detailed record of each of the noble Houses of Westeros, complete with descriptions of the noble lords and ladies and their appearances. Any attached character will gain an intrigue icon and the chance to glimpse your opponent's plans, but if Eddard or a Maester hold the book, they can stand as well, ready to face another challenge with more information to form the perfect plan.

While House Stark may be moving deeper into the shadows, few are better suited to take full advantage of the shadow keyword than House Martell. Doran has been plotting for years to set his family on the Iron Throne, but little does he know that his daughter Arianne Martell (Pit of Snakes, 55) has been forming her own plans to secure her birthright. Evolving from her previous versions in Journey to Oldtown (Journey to Oldtown, 35) and the Core Set (Core Set, 104), you no longer need to return Arianne to your hand to make use of her ability. Up to three times per round, Arianne may strip a challenge icon from a character when you bring one of your cards out of shadows. This sets you up to stand against specialized characters like Ser Robert Strong (The Shadow City, 10) who have high STR in a single area, or if you can lay enough schemes in the shadows, she can beguile even a Lord like Euron Crow's Eye (Core Set, 69) or Tywin Lannister (Core Set, 90) to remove all three of their icons and render their powers useless. Even the most stalwart warrior is no match for the cunning of a courtier with everything to lose.

King’s Landing is filled with those who would do anything to gain the power they desire, whether it be in the church, the court, or the field of battle. Now that you are among them, you must either achieve your victory or die in your pursuit. Do you have the cunning to survive the Pit of Snakes?

C$18.95
In stock
Article code 841333106225
This pre-constructed deck introduces you to the mechanics and key characters of House Martell to provide a stable foundation and highlight faction features.

A Game of Thrones LCG (2nd Edition): In Daznak's Pit

A Game of Thrones LCG (2e): Dance of Shadows Cycle 6 - Daggers in the Dark Chapter Pack

A Game of Thrones LCG (2e): Deluxe Expansion 6 - Kings of the Isles

out of stock
Quickview
Fantasy Flight Games
A Game of Thrones LCG (2e): Deluxe Expansion 6 - Kings of the Isles
“Your choice is simple. Crown me, for peace and victory. Or crown my nuncle, for more war and defeat.”
–Asha Greyjoy, A Feast for Crows
C$31.44
Fantasy Flight Games

A Game of Thrones LCG (2e): Deluxe Expansion 7 - Fury of the Storm

C$31.44
Out of stock
Article code 841333108267
Fury of the Storm is a deluxe expansion for A Game of Thrones: The Card Game that shines the spotlight on House Baratheon, the rulers of the Seven Kingdoms in the opening of George R. R. Martin’s A Song of Ice and Fire series.

Quickview
Fantasy Flight Games
A Game of Thrones LCG (2e): King's Landing Cycle 1 - At the Gates Chapter Pack
At The Gates marks the beginning of the sixth cycle for A Game of Thrones: The Card Game.
C$16.14
By using our website, you agree to the use of cookies. These cookies help us understand how customers arrive at and use our site and help us make improvements. Hide this message More on cookies »