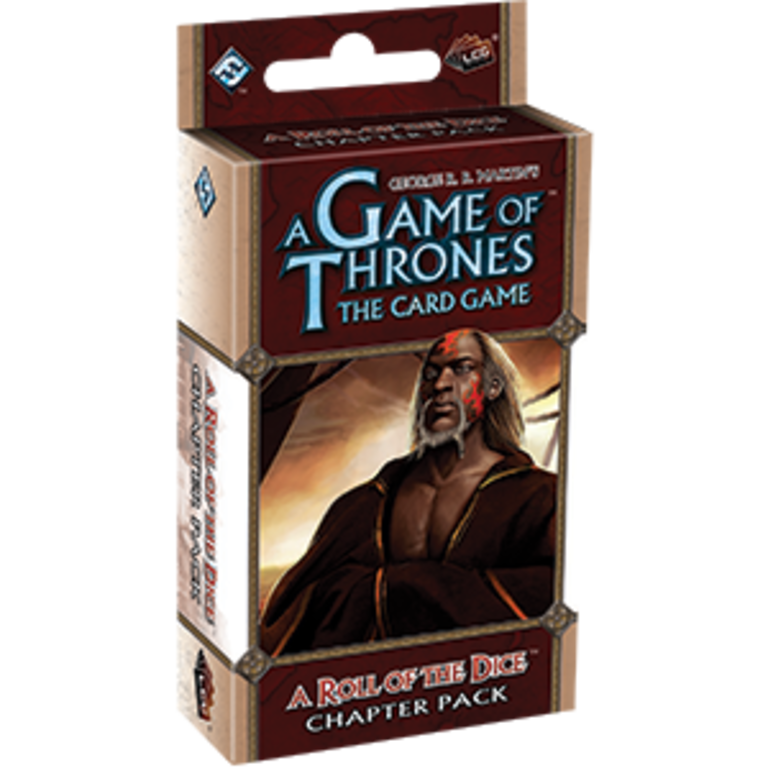 C$15.95
Fantasy Flight Games
Out of stock
Article code 9781616613945
A Roll of the Dice concludes the Beyond the Narrow Sea cycle of Chapter Packs in climactic fashion
Share this product:

Frog found him dicing with Beans and Books and Old Bill Bone, and losing yet again. The sellswords loved Greenguts, who bet as fearlessly as he fought, but with far less success.        –George R.R. Martin, A Dance with Dragons

The Great Houses each take long gambles as they double down on the intrigues they have hatched in Essos. At stake? The Seven Kingdoms of Westeros! A Roll of the Dice concludes the Beyond the Narrow Sea cycle of Chapter Packs in climactic fashion as each of the Great Houses reinforces its position by recruiting Armies, hiring Mercenaries, and treating with new Allies. Nonetheless, at the heart of every gamble is an element of chance, and fate plays a large role as eight new events unfold and alter your games, driving thrilling plot twists.

The 60 new cards (3 copies each of 20 different cards) in A Roll of the Dice can raise up characters or bring them crashing down with dizzying speed. You can try to out think your opponent to seize the Iron Throne, or manipulate your foes through deceit. You can hire sellswords to supplement your armies. But no matter how you pursue your agenda, when you play the game of thrones, you must still roll the dice!

An A Game of Thrones: The Card Game core set is required to play. Contains cards 101-120 of the Beyond the Narrow Sea series.

C$16.95
Out of stock
Article code 9781616613914
Chasing Dragons introduces many notable figures, including new Lords and Knights to advance their Houses' interests.

out of stock
Quickview
Fantasy Flight Games
A Game of Thrones LCG (1st Edition) The House of Black and White
C$15.95
By using our website, you agree to the use of cookies. These cookies help us understand how customers arrive at and use our site and help us make improvements. Hide this message More on cookies »