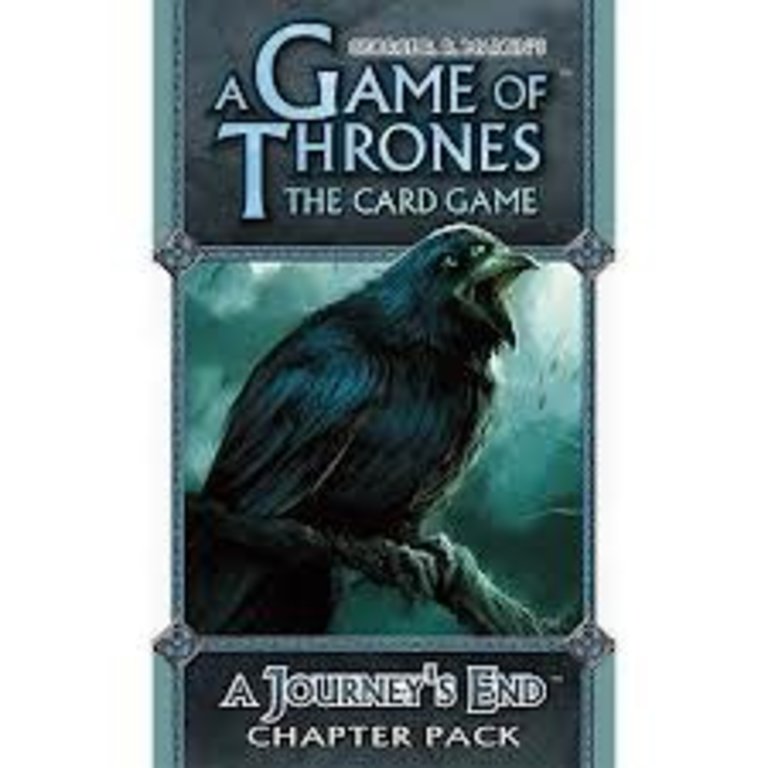 C$15.95
Fantasy Flight Games
Out of stock
Article code 9781616615536
As the long journeys they've undertaken throughout the A Song of the Sea cycle come to an end, the Great Houses of Westeros collide in new battles
Share this product:

The dwarf shrugged. “Do you want to wager your throne upon a woman’s whim? Go to Westeros, though … ah, then you are a rebel, not a beggar. Bold, reckless, a true scion of House Targaryen, walking in the footsteps of Aegon the Conqueror. A dragon.”
–George R.R. Martin, A Dance with Dragons

A Journey’s End is the sixth and final Chapter Pack in the A Song of the Sea cycle for A Game of Thrones: The Card Game! As the long journeys they've undertaken throughout the A Song of the Sea cycle come to an end, the Great Houses of Westeros collide in new battles, intrigues, and power struggles. The sixty new cards (three copies each of twenty different cards) in A Journey’s End launch players into heated naval battles and chaotic melees. You’ll find five new Warships, five cards to support the game’s Melee keyword, Mercenary lords, renowned Captains, and three new Prayers for the devout as they call to the Seven for guidance.

A Journey’s End also concludes the A Song of the Sea cycle with three new cards to support the game's new naval enhancement. Each of the Great Houses has wagered its future upon a path it hopes will lead toward dominion over the Seven Kingdoms. At A Journey’s End, it is time for you to throw in your lot. Will you wager your shot at the throne upon a whim? Or will you steer a true course – bold, direct, and fearless – as a conquerer come to claim your birthright?

An A Game of Thrones: The Card Game core set is required to play. Contains cards 101-120 of the A Song of the Sea series.

out of stock
Quickview
Fantasy Flight Games
A Game of Thrones LCG (1st Edition) the Pirates of Lys Chapter Pack
C$15.95
By using our website, you agree to the use of cookies. These cookies help us understand how customers arrive at and use our site and help us make improvements. Hide this message More on cookies »