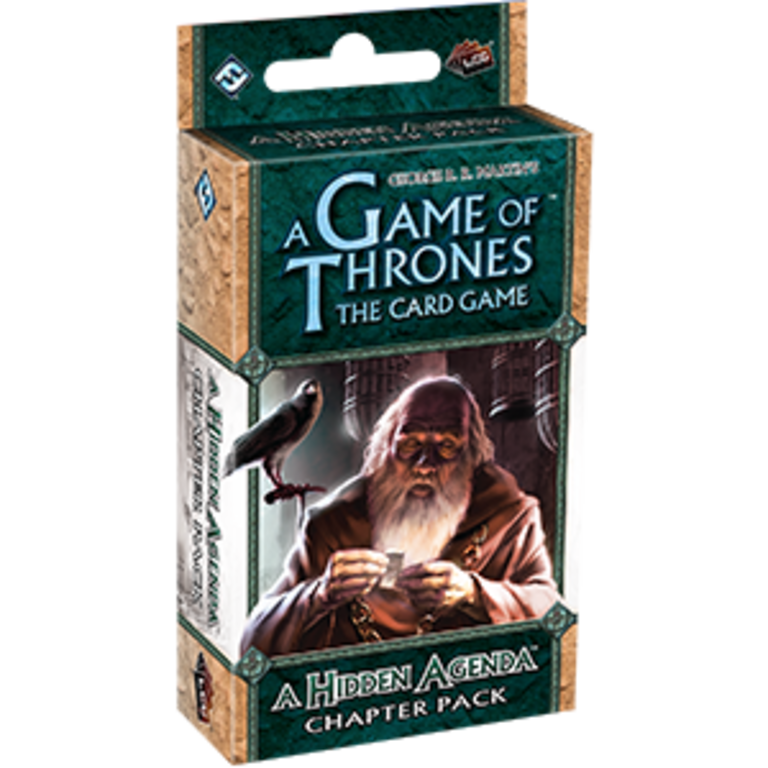 C$15.95
Fantasy Flight Games
Out of stock
Article code 9781616616120
A Hidden Agenda is the sixth and final Chapter Pack in the Kingsroad cycle for A Game of Thrones: The Card Game.
Share this product:

Marywn smiled a ghastly smile, the juice of the sourleaf running red between his teeth. “Who do you think killed all the dragons the last time around? Gallant dragonslayers armed with swords?”
–George R.R. Martin, A Feast for Crows

A Hidden Agenda is the sixth and final Chapter Pack in the Kingsroad cycle for A Game of Thrones: The Card Game. Schemes, secrets, and mysteries pervade its sixty new cards (three copies each of twenty individual cards), drawing the Kingsroad cycle to its climactic conclusion. As it grants players new means to make their final bids for the Iron Throne in a Westeros forever scarred by the War of the Five Kings, A Hidden Agenda asks the question, “Who is truly pulling the strings?”

Are the Lords of the Great Houses the powers to watch? Should the Lords be less concerned with each other and more concerned with Daenerys Targaryen and her three growing dragons? Or are the kingdoms’ advisors the ones who are secretly pulling the strings? All the previous Chapter Packs in the Kingsroad cycle have introduced new cards and tactics to blend into formerly established mechanics. Appropriately, A Hidden Agenda concludes with a wide sampling of these mechanics: the Bannerman trait, Shadows, cards at your command, decks without agendas, and the Maester trait. Each offers a different path to power, but only one House can sit the Iron Throne!

An A Game of Thrones: The Card Game core set is required to play. Contains cards 101-120 of the Kingsroad series.

out of stock
Quickview
Fantasy Flight Games
A Game of Thrones LCG (1st Edition): Horn that Wakes Chapter Pack
C$16.95
By using our website, you agree to the use of cookies. These cookies help us understand how customers arrive at and use our site and help us make improvements. Hide this message More on cookies »