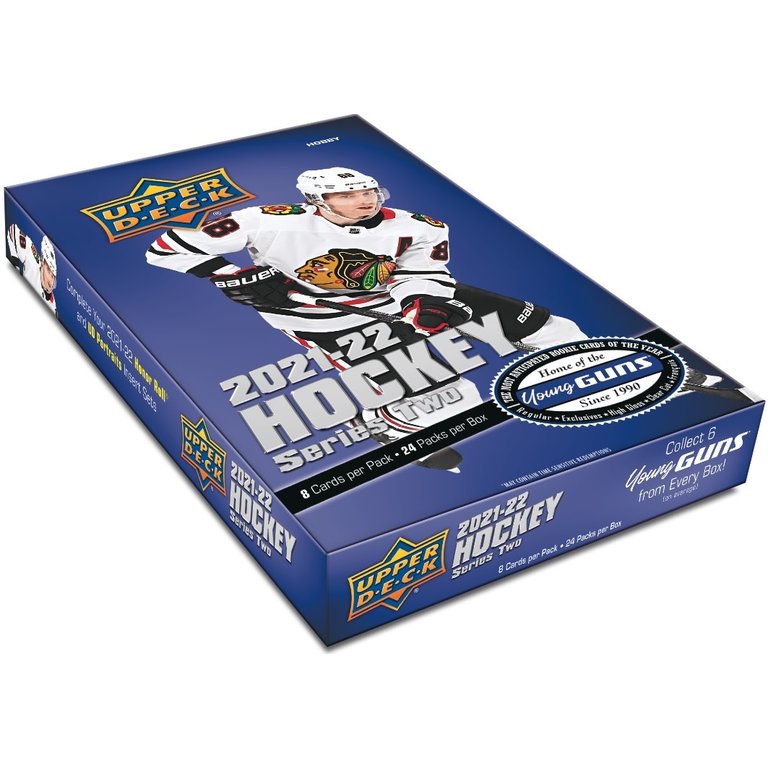 o    Dazzlers: Since its debut in 2020-21, this brightly-colored collection of popped-out, full-bodied star vets and rookies has been a hit! Collect both the Blue (one per box, on average) and Pink versions of the next 50 cards.

•    The ever-popular Fluorescence insert set returns with five color variations, a new rookie class and cards #’d as low as 5!

•    More Rookie Cards! Add more awesome rookie cards to your collection via the Rookie Breakouts (an acetate set #’d to 100), Rookie Materials and Rookie Threads Retro Patch (#’d to 15) sets. Also keep an eye out for Rookie Materials Patch cards #’d to 25. Each of these cards will be coveted by collectors!

•    New! Be the first to collect the brand new NHL Passages acetate set. This rare set consists of superstars that have been in the league for at least five years, and each card features four images from different points in each player’s career.

Back to home
Upper Deck

out of stock
Quickview
Upper Deck
**In-Store Only** 2021-22 Hockey Series One - Hobby Box
Young Guns® are the most anticipated rookie cards of the year! Collect six from every box, on average.
C$109.95
Upper Deck

Quickview
Upper Deck
**In-Store Only** 2021-22 Hockey Series One - Starter
8 Cards per Pack
3 Packs per Starter Kit
Every Starter Kit contains a Sophomore Sensations card - featuring a top 2020-21 rookie - you can’t find anywhere else!
C$17.95
By using our website, you agree to the use of cookies. These cookies help us understand how customers arrive at and use our site and help us make improvements. Hide this message More on cookies »