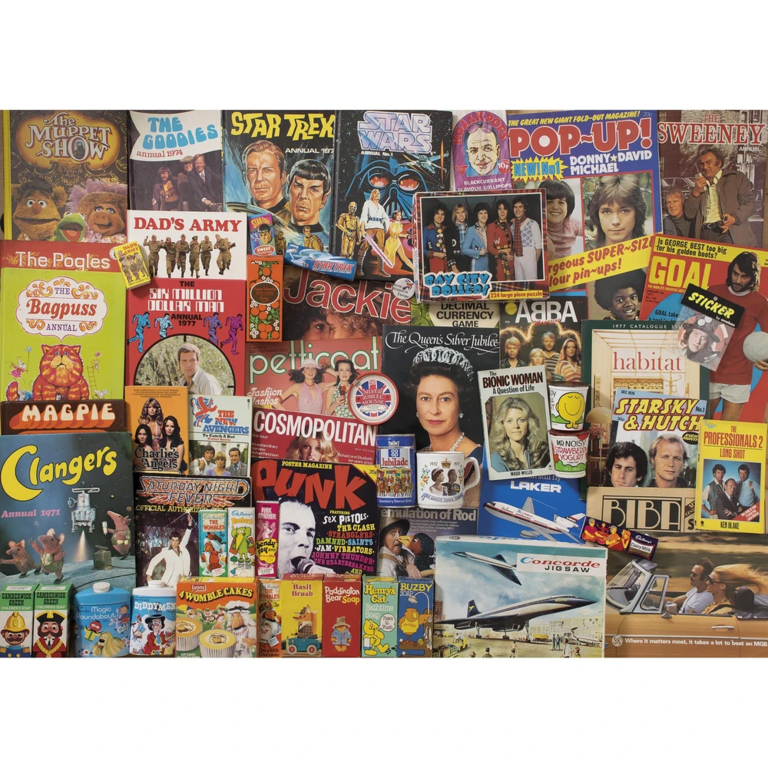 Britain faced a mathematical challenge when decimalisation ousted the old shillings and pence in 1971, and then, to reinforce this continental shift, the country joined the European Community (confirmed by the Yes vote in the referendum of 1975). After many economic woes, the three-day week and 25 per cent inflation, the country came together to celebrate the Queen's Silver Jubilee in 1977. Pageantry and street parties captured the spirit of the occasion. As the pop music scene matured, so its audience widened to a younger age group - the teeny boppers - who could choose from the heart throbs of the Osmonds, David Cassidy and Michael Jackson. In 1974, Rollermania reached its peak with the tartan invasion of the Bay City Rollers; in the same year, Abba won Eurovision with Waterloo. Glam rock vied with heavy metal sounds, while the alternative noise came from the anarchy of Punk, led by the Sex Pistols. Also, in the late '70s, dance floors everywhere pulsated with discomania, an energy created by the success of Saturday Night Fever. As Britain swayed on platform shoes in the early Seventies, many tried to keep their balance with calorie counting, despite the ever-increasing range of snacks, and Watney's Party Seven became the ultimate thirst quencher in the party scene. The era of global travel took off when a Boeing 747 jumbo jet landed at Heathrow. Economy fares were provided by Freddy Laker's Skytrain; Concorde provided a super fast, but expensive, alternative to America that began in 1976. While television was full of entertainment, from Bagpuss to the antics of Emu (attacking Michael Parkinson in 1976), it was the film Star Wars that captured the imagination. However, the sci-fi movement had been prepared by the many episodes of Star Trek, becoming cult viewing - "Beam me up, Scotty". As with all Gibsons jigsaws, the beautifully illustrated pieces are made from the highest quality 100% recycled board and are therefore a pleasure to work with again and again.